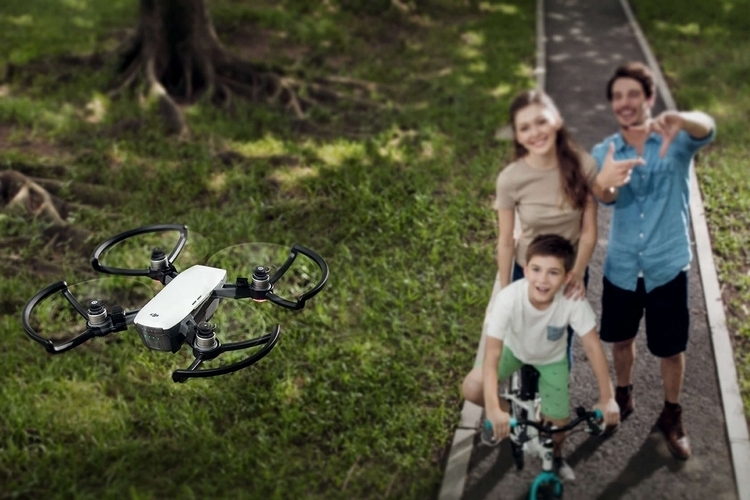 The Mavic Pro is already a pretty compact drone, but with the new generation of really small selfie-focused quadcopters, DJI needed to make them even smaller in order to compete. That, we’re guessing, is the motivation behind the DJI Spark, a drone that can collapse to around the size and weight of a single can of soda (well, if a soda can had extended arms, anyway).

Designed for selfies, the drone can be controlled using nothing but hand gestures (it doesn’t even have to be paired with the phone), allowing you to easily direct it where to go, when to stop, and when to take a photo. The catch? In this mode, the drone is limited to flying up to just 10 feet away, so you can’t take a long-distance selfie by relying simply on motion controls. 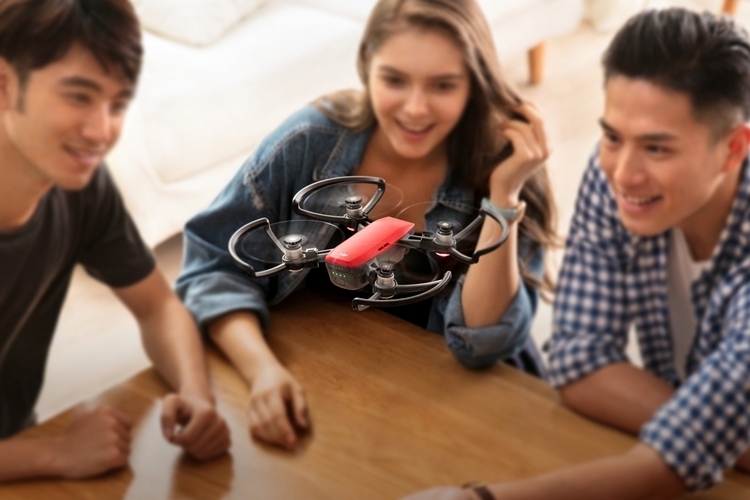 With the analog controller and the accompanying app, the DJI Spark can be controlled much like a regular drone, either manually or via one of the several autonomous recording flight modes. It has an integrated 12-megapixel camera that can shoot 1080p video, so you can use it as a suitable alternative to larger, more cumbersome quadcopters. Maximum speed is 31 mph, so this is quite a capable flyer, although the much smaller battery only affords it 16 minutes of flight time before needing a fresh swap. Features include a video transmission range of 1.2 miles, a two-axis mechanical gimbal, and the usual array of safety features found in DJI’s other drones. 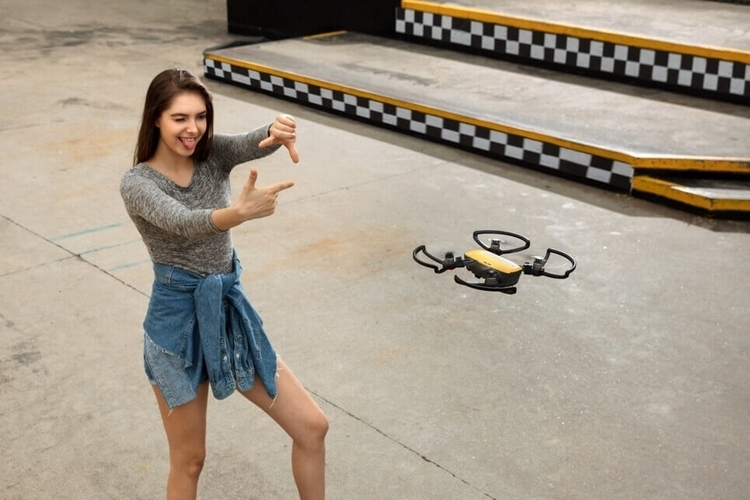 Available now, the DJI Spark is priced at $499 on its own and $699 in a bundle with a controller, extra batteries, and other accessories. 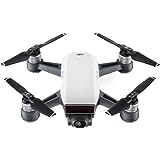 Join us as we try to find out if this offering from DJI is the ultimate mini-drone or not by taking a closer look at the device.

Design and Build Quality – DJI is widely regarded as one of the most reputable manufacturers of drones. Their products are known for their excellent build quality. This mini-drone from them is no different. It is amazing to see that how much technology they were able to put in such a sleek and compact body. The DJI spark measures in at just 143 x 143 x 55mm and weighs in at around 300 grams. A great thing about the design of the product is that the product is available in multiple colors including Alpine White, Sky Blue, Meadow Green, Lava Red and Sunrise Yellow. This design element is a breath of fresh air in the saturated market of drones filled with gray, black and white devices. The build of the device is rugged. The device feels sturdy in the hand looks as if it can take a hit or two. The small footprint and foldable propellers allow it to fit in most bag packs with great ease. The device comes with very small arms and no legs. The camera on the DJI has been tucked away securely to minimize damage from falls.

Camera – Despite the small size, the DJI spark comes with a very reasonable 12-megapixel 1/2.3-inch CMOS sensor. The camera has the ability to snap pictures at a resolution of 3,968 x× 2,976 and record Full HD 1080p videos at 30 frames per second. On the front of the sensor, you can find the 25mm lens that has the ability to capture 81.8 degrees field of view. The images produced by the camera look quite sharp with good contrast and great color accuracy, the video recording is also excellent, the camera is capable of producing smooth aerial video shots.

The user is provided with full exposure control. The device also offers a plethora of built-in camera modes, like Auto Exposure Bracketing for HDR photos, Timed Shot, and even Shallow Focus. The panoramic shots are also quite good with accurate stitching of scenes. The drone also has the ability to change the camera position depending upon the orientation of panorama selected by the user.

Smart shooting modes like the active track mode are also present on the device. This mode of shooting tracks the movement of the subject automatically and is capable of tracking the subject even if it is in motion.

The only downside of the camera is that it lacks RAW shooting mode and is not capable of recording 4k content. However, the camera quality overall is quite good.

Battery life and Charging – These are two of the most important features of a drone camera. All other features are of no use if these two are not good enough. The DJI Spark has a manufacturer claimed flying time of 16 minutes. This stamina reading is a bit more than other competing devices. A good thing about mini drones is that almost all of them come with a dual battery setup. This means that the DJI spark has the ability to work up to 26 minutes on a single outing.

The charging cradle offers quick top ups, it has the ability to charge the device to full in about 45 minutes. The charge time entirely depends upon the amount of battery left in the system though. For example if you land the device on the first warning, you can expect to get it fully charged in only thirty minutes.

Controls and Usage – Controls are the most interesting aspect of the DJI Spark. The device can be controlled entirely by making use of a feature known as PalmControl. The gesture-based controls are intuitive and work quite well. Raising your hand enables this gesture control mode. Double tapping the power button starts the scanning of your face, once scanned properly, the drone will fly off. The control part is unique, you can steer the device during flight by waving your hands. This control method has some though. The drone can recognize your gestures within a space of 10-20 feet depending upon the type of gesture. Once you get past that, these controls simply will not work.

These are much more than a gimmick however, the PalmControl makes it that much easier for the user to start the flying session in seconds. It makes controlling the device a fun activity. This feature is great for beginners as well, with this mode of control they can get going within a matter of seconds. Not everyone has the ability to control the drones via the controller. This method of controlling however makes it easier for non-techy people to dive into the world of drones. The drone responds quite well to the controls and despite the small size, it carries quite a lot of sensors that aid in object avoidance and movement. The in-air handling of the product is class leading.

The range of the DJI Spark while using it via mobile app paired to your phone over Wi-Fi tops out at about 300 feet away and 150 feet up. By spending an extra 150$, you can get a remote controller for your DJI Spark that increases the range to 1.2 miles and allows the DJI to reach a speed of 31 miles per hour in the sports mode.

Price and Conclusion – The DJI Spark is available in multiple variants, the base variant only includes the device and as priced at 499$. The FlyMore Combo gets you the device, remote, extra battery, portable charging hub, and additional rotors and rotor guards for $699. At this price, you will have to look hard to find a better device. DJI has a great history of keeping the firmware of their devices updated, so you need not worry about the longevity of your device.

This mini-drone does not sacrifice much in terms of performance and build quality. The build of the device is rugged and the design is very attractive and ergonomic. It comes with an excellent 12MP camera that is capable of producing smooth aerial videos and crisp snaps. The advanced sensors allow it to maneuver around in-flight with ease. The gesture control works as expected and makes the flying quite easy and fun. All these features combined make it a well-rounded package especially for beginners who want to dive deep into the world of drones. The small size makes it a perfect companion for road warriors as well who just need a smaller alternative to the full sized drones.

The limited range may worry some but it is an issue that can be solved by purchasing the remote controller. The lack of 4K recording is a downside but at a starting price of 499$, we cannot complain.

Overall, the DJI Spark is a great starting point for beginners and is worth a buy for anyone who is looking for a compact yet powerful drone with great imaging and video recording capabilities.