Do You Have A Talking Alien On Your Desk Yet? 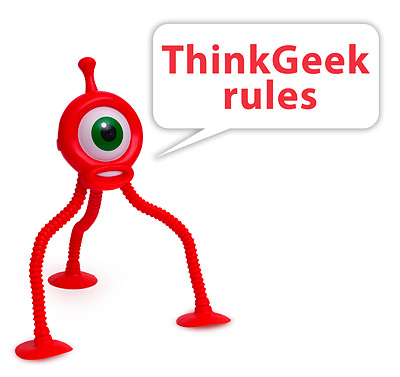 Always wanted your very own talking alien, that could attach to anything and say stuff to people that walked past it?  Well, if you didn’t before I’ll bet you do now.  The Echo Bot is a three legged – one eyed – (hey he’s considered very handsome on his planet) English speaking alien robot that has suction cups for feet and can record a ten second message and pass it on to anyone that happens to pass by.

Whether your using him as a memo recorder or as a way to startle people walking into your office, Echo Bot is perfect for attaching to walls, windows, computer screens or the television in the break room.  Echo Bot will repeat his message for anyone passing within three feet of him and can be made to say something else simply by pressing a little button and talking.

Bosses – let everyone who comes into your office hear the Echo Bot say “you’re fired!” Moms – before your kids even ask have Echo Bot tell them “No!”  We’re sure you can think of about a million uses for it.  Also, when the aliens do invade they won’t vaporize you with Echo Bot on your desk.