Doctor Who Fan Builds His Own Full-Sized Dalek, Forces It To Do Good Deeds 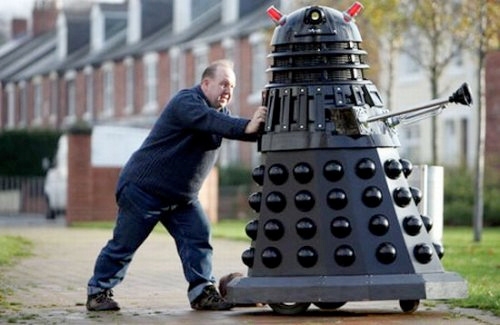 If I’m going to try to conquer the universe, I want to do it with a bunch of heartless armored beings from another planet too.  Same as this Doctor Who fan, who thought it wise to build his own Dalek mutant to obey his every beck and call.

Who is this future master of the human race (and future adversary of the Time Master)?  It’s 47-year old Rob (probably short for Robot) Bosher, a healthcare assistant, who fashioned the creature after seeing a plan for one posted online.

Built for around £700, Bosher’s full-size Dalek replica isn’t especially high-tech, but looks as dauntingly awesome as I’ve always imagined one to be.  It uses an electric wheelchair as base, allowing it to be controlled via a joystick remotely (or by pushing from behind, as per the photo, in case it runs out of juice). To amp up the realism, it comes with working lights all over its body, a voice modulator (to get it speaking in that ominous tone) and a moving eye made from a Magic 8-Ball.

According to Rob, he’s never been much of a workshop DIY guy, so the reproduction Dalek is as much a learning experience as it is a product of his fancy.  He has started a new website (which I can’t find) that intends to use the Dalek for charity (wow, forcing an evil alien to do good deeds – bad idea) and has gotten in touch with at least four other folks in his area who have either built or bought their own.  Just a few more, guys, and you’ll have yourself your own Dalek army, who will then proceed to kill you and every Earthling in existence, all while croaking in their trademark emotionless tone to “Exterminate all humans!”