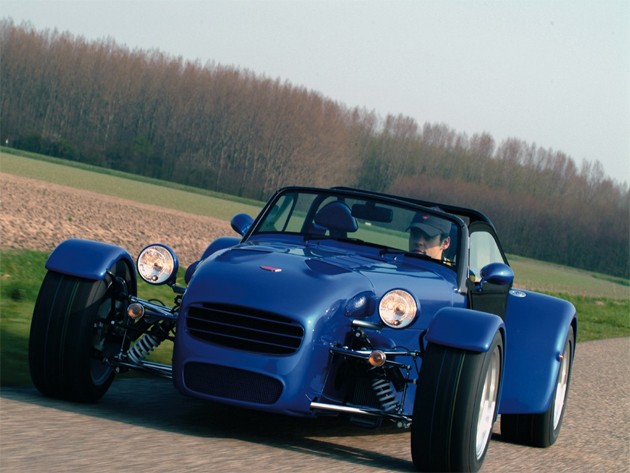 We’re not sure what Donkervoort means (or if it even means anything, really, other than being Joost Donkervoot’s surname), but it’s my new favorite word for the day. Strike that. It’s my favorite for the next 100 years. Sorry, Snuffleupagus. You had a good run, but the last time your name sounded funny was when I still watched Sesame Street. Which was yesterday on VHS.

Anyway, the reason we’re donkervoorting right now is because Donkervoort Automobielen BV recently announced their latest car, the Donkervoort D8 235 E. Yes, it’s a Se7en (you know, cars based on the Lotus 7) and it’s one bundle of donkervoorting awesome. Okay, no more making up words. Promise.

A top-open, low-profile car (or, as some people put it, a motorcycle on four wheels), the Holland-based manufacturer’s new vehicle takes their well-worn D8 range and gives it even more power. While it runs the same turbocharged 1.8-liter 20v Audi engine as before, it uses changes on the intake, exhaust and the ECU to drive the horsepower output to 235bhp (up from the original 210).

Sure, that doesn’t like a lot of ponies. That’s until you learn, of course, that the Donkervoort D8 235 E weighs a ridiculous 1,300 lbs. Pair the two together and you’re looking at retardedly fast acceleration. Lightness is partly due to the lack of most modern electronic driving safety mechanisms, such as ABS and ESP. A light but very stiff chassis and a specially-developed wheel suspension are all you get, making driving this Se7en all about the car, the road and you.

We don’t have pricing details, but a quick search for second-hand D8’s reveal a range in the neighborhood of $70,000 to $100,000. Pretty donkervoorting expensive.