This Eight-Foot Long Emergency Tent Fits In Your Pants Pocket 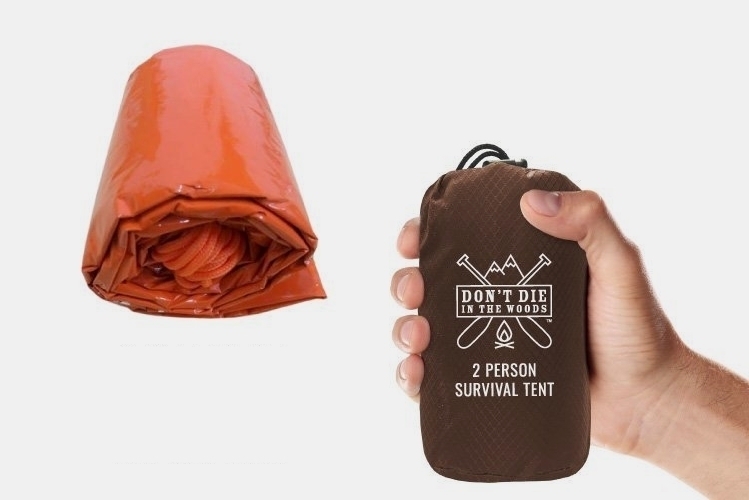 Chances are, you won’t need a tent to get through the day. Unless, of course, an apocalyptic event happens out of nowhere while you’re out in the middle of nowhere, at which point, yeah, having that tent would probably come in handy. That’s the idea behind the Don’t Die in the Woods Survival Tent.

No, it’s not one of those tents that you’ll have to strap down to a backpack or carry in its own case. Instead, it’s a packable shelter that you can stash in your pants pocket, ready to give shield you from the elements at a moment’s notice.

Billed as the “toughest ultra-light emergency tent on Earth,” the Don’t Die in the Woods Survival Tent is cut in ultra-tough HeatFlex mylar that can withstand the harshest weather conditions in the roughest terrain. Unlike other emergency tents, this isn’t disposable, so you can pack it back into its pocket-sized pouch after use to keep you ready in the event of another emergency. According to the outfit, the tent is waterproof, windproof, and light-reflective, so it should keep you dry in the middle of unfriendly weather while being easier to spot in the dark.

The tent, by the way, comes with two functional sides: one in orange and another in silver. During colder weather, you set it up with the orange part out, allowing the silver lining to reflect heat back inside the shelter. According to the outfit, it can retain up to 90 percent of heat, making it ideal for keeping you toasty during chilly weather conditions. During hotter months, the tent can be set up in reverse with the silver lining on the outside, which should help keep hot air out of the tent to keep things comfortable.

The Don’t Die in the Woods Survival Tent has a simple rectangular tube design that should accommodate one person comfortably, all while setting up without the usual hassles of traditional tents. Instead of stakes and spikes, the tent comes with a 20-foot paracord that’s designed to run through the top of the tent. From there, you simply tie each end to a nearby tree or post to keep the tent upright, then anchor the corners using rocks or your gear.

In case trees aren’t available, by the way you should also be able to use it as a functional sleeping bag, similar to a bivy – just tie one end shut using the paracord and you’re set. Oh yeah, the paracord is rated at 450 pounds, too, so it should hold up to the roughest experiences the outdoors can throw its way. Other features include extra-wide taped seams (to help ensure the tent holds together for multiple uses) and a tent size of 8 x 5 x 5 feet (length x height width), so this should fit even the tallest individuals without any trouble. Unless, of course, you’re over eight foot tall, in which case, why aren’t you in the NBA?

The Don’t Die in the Woods Survival Tent is available now. 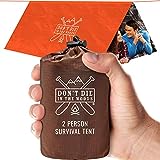