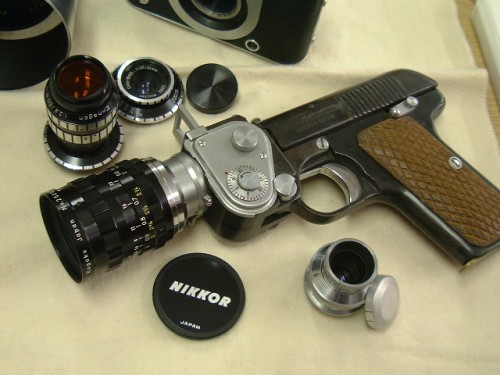 Sometimes, old gadgets are even more awesome than new ones.  That’s certainly true with the DORYU 2-16 Pistol Camera, a police-issue camera gun originally fashioned way back in 1952.  Take that James Bond.

Why a camera gun?  Barring any Japanese society historians from the post-war around me, I guess it’s so  that the police can draw it from their holsters, right at the same time they pull out a pistol.  The preserved piece belongs to one Ryu Koakimoto-san (pictured below), who claims it was an actual equipment policemen carried during the era. 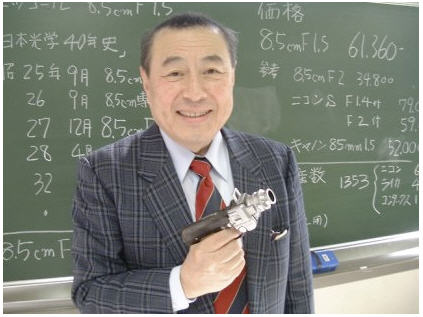 According to Ryu, the pistol-shaped image capture device was used to photograph criminals in the act, as well as to record the faces of protestors (who will likely need to be arrested later).  The 16mm camera is equipped with a built-in flash system, a bullet clip that holds five magnesium cartridges and a C-mount (like the one used in 16mm movie recorders).  As you can see from the first photo, it can be fitted with a variety of lenses.

I guess the Japanese have been into pretty crazy gadgetry well before their products ever hit the mainstream.  The DORYU 2-16 was reportedly a failure as a police equipment, which is why there are very few currently in existence.

Not sure how the gun’s mechanism works, but it looks like a completely insane way to take photos.  You’ll probably have people screaming, lunging at you and calling the cops (“Hello 911, there’s a guy with a gun and it flashes!”) as soon as you try take a single shot.