The .NET Gadgeteer Wants To Give Arduino Some Competition 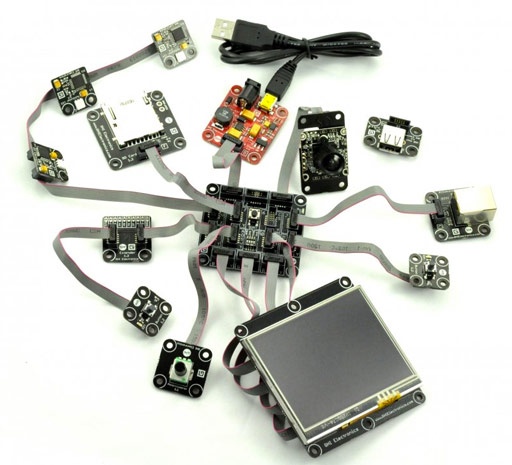 When building homebrewed interactive gadgets, your favorite neighborhood tinkerer has long depended on Arduino boards to simplify their builds.   While the open-source community’s love affair with the platform isn’t likely to change, it’s about to get one serious rival in the .NET Gadgeteer, the new hacking mainboard on the block.

Developed by Microsoft’s Sensors and Devices engineers over two years, it’s a hardware and software system that enables quick development of smart gadgets for prototyping, research and showing off to your fellow geeky friends.  Yep, just like an Arduino, except with a lot more power (think five times the processor speed, 150 times the storage and 500 times the memory), making it suitable for larger, more complex projects.

The .NET Gadgeteer is a development platform consisting of a small mainboard with an ARM processor, 4MB of flash storage, 16MB of RAM, WiFi, Ethernet, an SD card interface and USB ports.  While that should be good enough to make for plenty of hacking opportunities on its own, it doesn’t stop there.  You also get an array of attachable modules, like sound cards and sensors, that can give the board extra capabilities as you need them.

The hardware part is complemented by an open-source software platform based on the .NET Micro Framework. Not only does the software module allow object-oriented programming (so you can pick specific code packages as you need their functions), it also includes Visual Studio’s IntelliSense feature (for auto-completing lines of code) and robust debugging tools.

Granted, the .NET Gadgeeter sounds overkill for a lot of the smaller-scale projects that employ Arduino.  For bigger-thinking product developers and tinkerers, though, this could be exactly what they need to bring more complex gadgets into fruition.   It will be available beginning September both as an individual board ($120) and a Spider Starter Kit ($250).