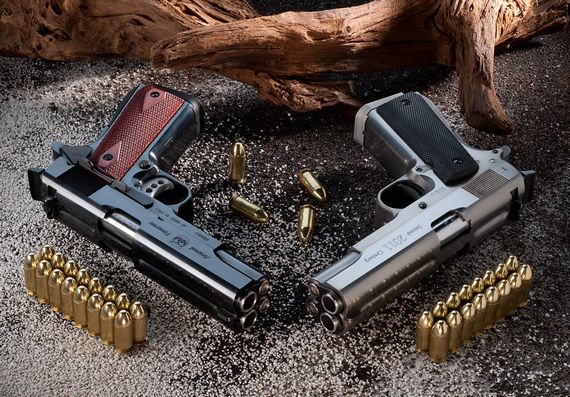 Two bullets hitting the same target is always more fun than one.  That’s why every video game super cop  simultaneously fires a pistol from each hand at some point.  And that’s why people gushed over the ridiculous Doppleglock.  The Double Barrel Pistol simplifies the two-bullet action, letting you shoot a pair of slugs using just a single gun.

Made by Arsenal Firearms, the deadly weapon can fire two .45 caliber rounds at the same time.  Just like video game guns have always been meant to be, except in real life.  It’s supposedly the first of its kind, too, so even bad guys will stare in awe while you put a pair of slugs in their noggin.  Okay, maybe not, but it’s still downright awesome. 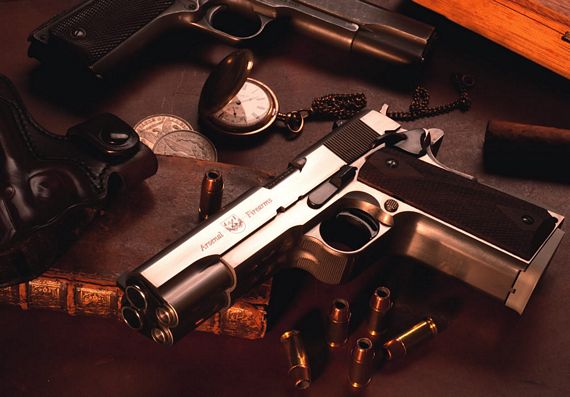 The Double Barrel Pistol is a long-slide semi-automatic firearm measuring 229 x 145 x 50 mm (l x h x w). Sporting a Colt 1911-A1 system, it features short recoil action, a single spur double hammer trigger and 39NiCrMo machined steel parts.  Arsenal claims any shooter able to handle a .45 Acp should be able to work with the gun, which delivers a steady hold and accurate performance, despite its dual-barreled design.

Magazine holds two columns of 8 bullets each, allowing you to dispense sixteen slugs at your unfortunate mark before needing to reload.  When shot, the bullet pairs will land between 1 to 2 inches apart on the target, delivering enough force (total of 460 grains) to immediately knock down a bull.

We’re not sure how much a gun that fires two bullets side by side makes sense in the real world, but the Double Barrel Pistol is here. And we’re willing to bet you want one.  Pricing has not been announced yet, but it will come in black and silver finishes.