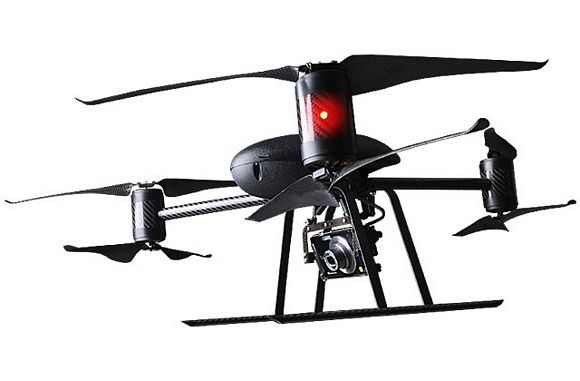 In the world of RC helicopters, there’s a great divide between model choppers that people fly out in the park and unmanned military vehicles designed to spy on enemy locations.  Draganfly’s series of heli cams, particularly the award-winning Draganflyer X6, slots right in between – easy enough for the casual hobbyist yet powerful enough for police and industrial applications.

When it comes to quick aerial surveillance, few technologies can lay claim to what the Draganflyer X6 can do.  Sporting six carbon rotors distributed along a triple-tipped carbon-fiber body,  it can fly rapidly in any direction without the need for difficult maneuvering.  As such, it can perform its overhead filming duties indoors, all while being able to resist up to 18 miles per hour of wind coursing through the open skies.

Unlike typical consumer-grade heli cams, the X6 offers vibration-free mounting (right on the vehicle’s belly), allowing for smooth and jerk-free captures of both images and video.  It can be loaded with various types of recording apparatus, including HD camcorders, digicams, night vision cameras, thermal imaging units and whatever else you may need.

The remote pilot manages the Draganflyer’s movements with a handheld controller, with everything it shoots available for viewing on a pair of bundled video glasses.  While you control the direction and flight, the vehicle takes care of everything else, automatically adjusting itself with the help of 11 onboard sensors that include gyroscopes, accelerometers, magnetometers, GPS and a barometric-pressure sensor.  The tech is so advanced that it can maintain its own flight even after one of the motors fail.

The Draganflyer X6 packs its own rechargeable battery that can be replenished in 30 minutes, supplying the vehicle with 450 watts of power for an aerial time of up to 25 minutes.  Price, of course, reflects the utility, which means it’s likely not for backroom hobbyists who just want to get an overhead shot of their pets for a YouTube video.  It’s available now for $15,000.