DRL Racer4 Street: Finally, An Off-The-Shelf 90MPH Racing Drone You Can Own Yes, DJI’s consumer drones have a Sport Mode that enables some pretty high-speed flight. Problem is, their fastest speeds look very paltry next to the 90mph flight speeds you’ll find among racing drones that are being flown during tournaments. If you want drones that can fly that fast, here’s your chance with the DRL Racer4 Street.

Made by the Drone Racing League, it’s billed as a street-ready version of the drones used in their competitions. That means, it can run just as fast as the drones you’ll find in the 2019 DRL/Allianz World Championship Season, all while being duly-equipped to make it safe enough for casual hobbyists like you, me, and that drooling guy at the park to operate. The DRL Racer4 Street is a sporty-looking quadcopter that bears the same streamlined and aerodynamic design as the ones used in DRL tournaments. That means, it gets the same strengthened polycarbonate fuselage that can absorb serious hits, as well as the slim body profile and long arms for slicing through the air. Suffice to say, this is one aggressive-looking drone. It’s powered by 1250KV BH Avenger motors that generate over 1,850g of thrust, which packs enough muscle to send it careening from 0 to 90mph in under a second, all while a 2200 mAh battery pack provides the necessary juice to keep the whole thing in the air.

Those motors produce power for the 7-inch HQ PC propellers, which boast sticky cornering, a forceful bite, and highly-durable performance. According to the outfit, it’s hardwearing enough to shrug off everything but the most disastrous of crashes.  They’ve redesigned the electronics in this consumer version, by the way, to support off-the-shelf radios and straightforward parts replacement, making it just as easy to fix as any consumer drone, so you shouldn’t have any worries whenever your drone takes any kind of damage. 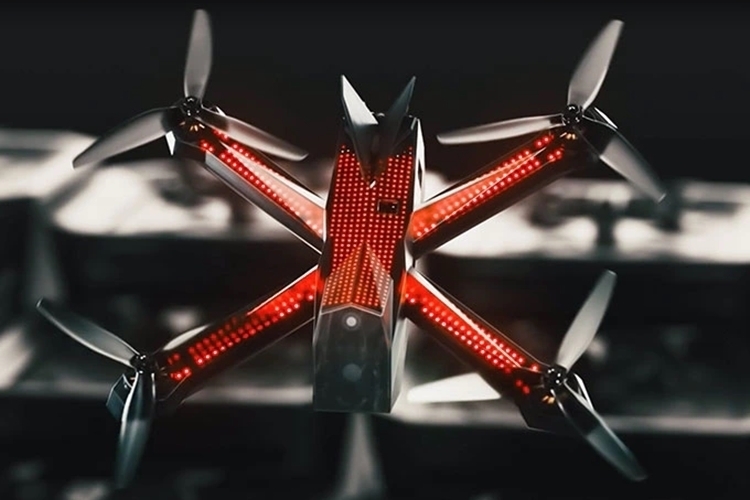 While the race version has 1,000 LEDs on the body that are used to animate sponsor logos, the DRL Racer4 Street only comes with 100 that are housed inside light pipes. That means, you can’t quite create the same complex light-show animations as the ones racing on TV, although the outfit promises they’re working on the software side that will let it achieve some pretty excellent results all the same. Do note, this isn’t waterproof, so if there’s any hint of rain outside, don’t even bother taking this out, as you’re only likely to damage the electronics. Because it’s meant for casual users, the drone is designed for easy transport. That means, all four arms of the drone can be removed for more easily organizing in a drone backpack. If you want to practice piloting a racing drone while waiting for your own drone to arrive (it won’t ship until April 2020), by the way, the outfit is offering a software called DRL Simulator. Currently available on Steam, it’s designed to teach users the basic of FPV flight, train them, and provide real-time feedback, so they can hone their skills in a safe environment before even flying their drone for the first time.

A Kickstarter campaign is currently running for the DRL Racer4 Street. Pledges to reserve a unit start at $599.