Drumpants Put An Electronic Drum Set In Your Trousers 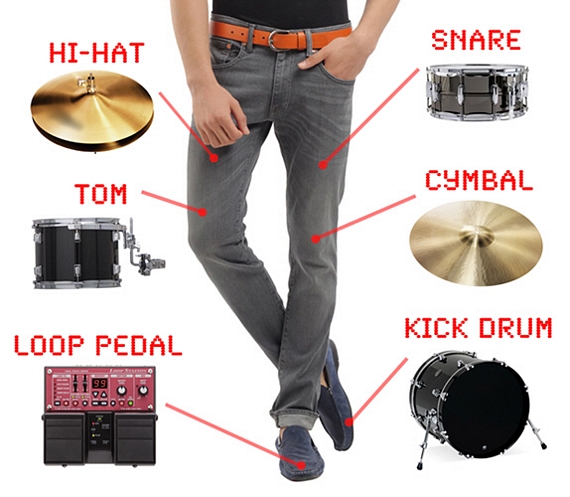 A while back, we featured a wacky one-off product called Ubiquitous Drum Pants, which hooked up a pair of trousers with various electronics that allowed it to function as an electronic drum machine when tethered to a PC. Well, someone refined the idea and the contraption is now ready for primetime. Okay, we’re not actually sure about primetime, but they’re definitely going to try with the Drumpants.

Billed as the “world’s first industrial quality wearable musical instrument,” it consists of an assembly of electronics that you can attach to inside your trousers using ultra-thin velcro pads. Once in place, simply tap on the corresponding control sensor to trigger individual percussion sounds just like a standard pair of electronic drums.  Easy. 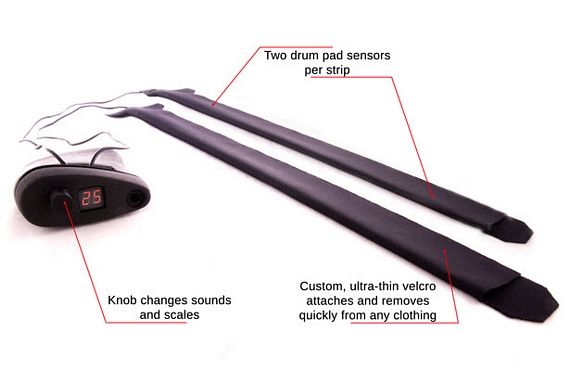 Drumpants uses two wearable strips with three touch-sensitive pads each that can be individually assigned any of 100+ pre-recorded sounds available from the accompanying control box, essentially giving you a six-piece drum ensemble along your legs. It’s not limited to playing drums and percussion, either, as the control box includes guitar, piano, synthesizer and other instrument sounds. Hook up the control box to a a speaker (they recommend portable wearable ones) and you’ve got yourself a perfectly functional electronic instrument literally under your jeans. Aside from the touch-sensitive pads, each strip also comes with a foot pedal sensor which you can program separately, allowing you to outfit yourself with a full drum kit, complete with bass drum and clap pedals.

Since anyone interested in this will likely be interested in using it as a controller, it comes with Bluetooth 4 and microUSB connectivity. Basically, you can pair it with any phone, tablet, or desktop app that accepts MIDI or OSC input for whatever purpose it might serve you.

Currently, Drumpants is a fully-funded Kickstarter project. It’s still ongoing, with pledges to reserve a unit starting at $99.