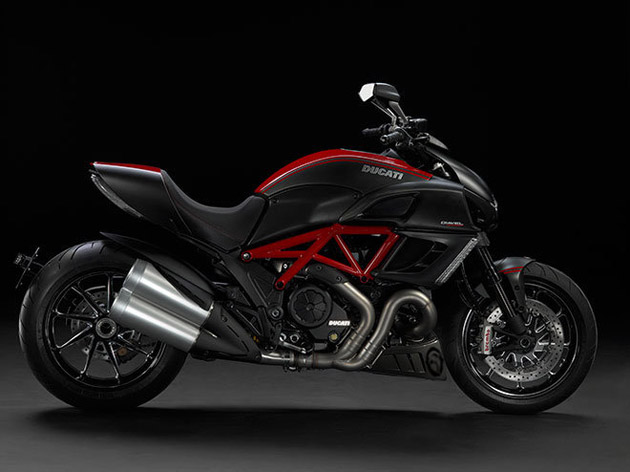 Think your raked-out, chromed-out American cruiser is badass?  You might want to chew on that when you see the Ducati Diavel, a monster of a two-wheeler that looks more like an enthusiast’s wishful thinking than a production motorcycle.

Packing 162 horsepower and 94 pound-feet of torque, the bike tips the scales at a light 456 pounds, making it an unusual combination of hulking power, burly looks and feathery (at least, as far as cruisers go) heft.  That’s just the base version – a Carbon model, which replaces various parts with the lightweight element, is said to lighten the load by another 7lbs. 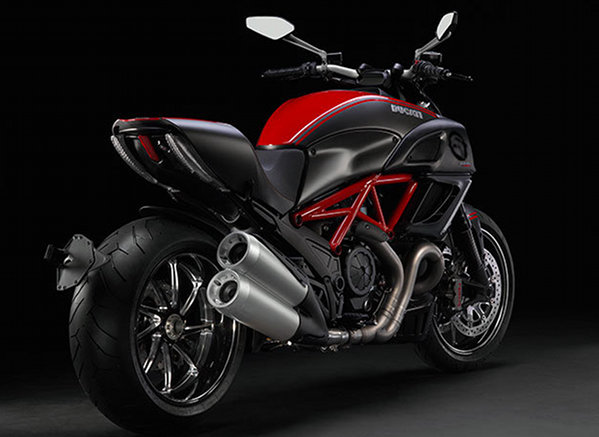 One look at the Ducati Diavel and there’s one thing you notice quickly: the massive 240-section tire sitting at the rear.  We’re not sure what performance enhancement that thing creates, but it’s a surefire way to get everyone to notice what you’re riding (as if most people didn’t drool at the sight of Ducatis already).  It’s got those low-slung seats (just 30.3 inches in height) in keeping with the cruiser tradition, too, with a passenger peg that can fold under when not in use.

There’s also a ton of technology here than what my scooter-riding crotch is used to.  From the ride-by-wire throttle system to the adjustable 50mm Marzocchi USD forks to the  tank-mounted TFT-based instrumentation to the rider-switchable traction control to the hands-free ignition to the anti-lock brakes, it’s a modern sportsbike trapped in a cruiser’s body – and we couldn’t be more envious of whoever can afford this technological sculpture.

The Ducati Diavel (supposedly a local dialect for “devil”) will be available for $16,995, with the Carbon version requiring an extra $3,000 on top of that.