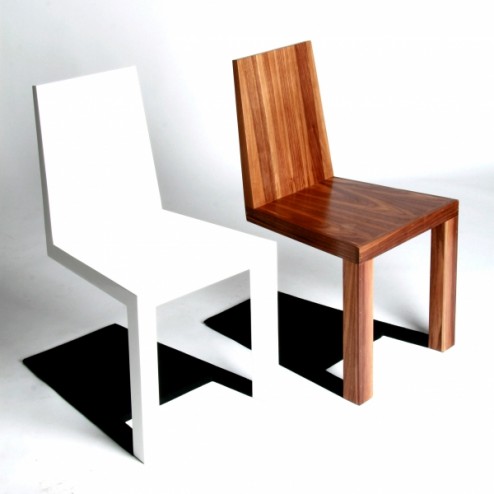 I’ve seen folks try and implement floating chairs before, but never one that was this clever.  Called the Shadow Chair, the Duffy London creation is a seat that looks like it stands on two front legs with nothing else but air holding the rest of it.

How did they pull it off?  Most people think it’s hoisted up a wall, yet the Shadow Chair can stand pushed back in the corner just as well as in the center of the room.  Some little-known Physics then?  While that may be possible with the help of space-age tech, I’m afraid that would cost a tad too much for a piece of furniture.

Instead, the Shadow Chair uses a clever optical illusion that allows it to defy gravity.  That shadow on the floor?  It doesn’t actually exist – it’s a steel stand that serves as the chair’s base.  The metal extends into the frame of the chair, allowing it to hold steady while missing two legs.  They did a hell of a job covering it up, though.

The chair’s body, which hides the sneaky steel frame, is made from Birch wood, harvested from forests managed by the Forest Stewardship Council.  Complete chair dimensions are 85cm x 45cm x 60cm, with buyers getting a choice of stylish finishes.   It’s available for purchase directly from Duffy London, at a £795.00 price tag.