Dynamic Lamp Lights Up Using Kinetic Energy Without The Cranking 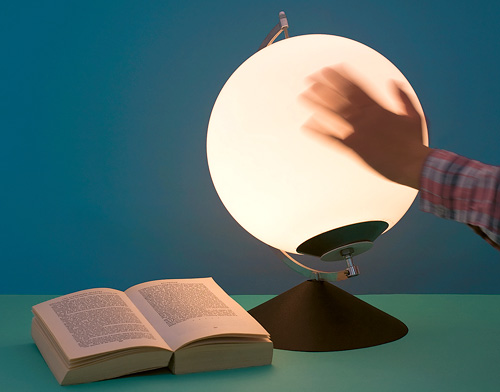 Ever tried one of those hand-cranked dynamo lamps?  They’re awesome for saving on electricity and all, but they do require too much work to get even a decent amount of light produced.   Karin Johansson’s Dynamic Lamp, on the other hand, uses the same dynamo function to generate the power, but does it without requiring you to strain your limbs in the process.

A spinning globe mounted on a diagonal axle, the Dynamic Lamp creates movement with just a minimal amount of effort.  Instead of one hand crank giving you one dynamo rotation, a soft push at the globe gets it to turn several times, essentially multiplying your efforts.  As such, the internal mechanism manages to harvest more kinetic energy than what you’re actually providing, allowing it to produce greater loads of electricity than when you put in the same effort cranking a lever.

According to the designer, the ball (which fits LED units inside it) lights up once it generates charge.  As with hand cranks, the more you spin it, the better the lighting will probably get.  Based on the demo video, it looks bright enough for use as a study lamp, as long as you give it a good spin every time the light begins to fade.

There isn’t much in the way of details for the actual design, but fitted with a capable battery, I figure the Dynamic Lamp can store a good amount of charge with just several spins throughout the day.  If you’re watching TV, for instance, you can reach out during commercials and give it a whirl.  When you’re on the computer, just get your hands off the keyboard for five seconds and push it to spin.  I won’t be surprised if the globe design actually replaces hand cranks in the numerous kinetic energy devices currently in use – it just seems like a smarter idea.