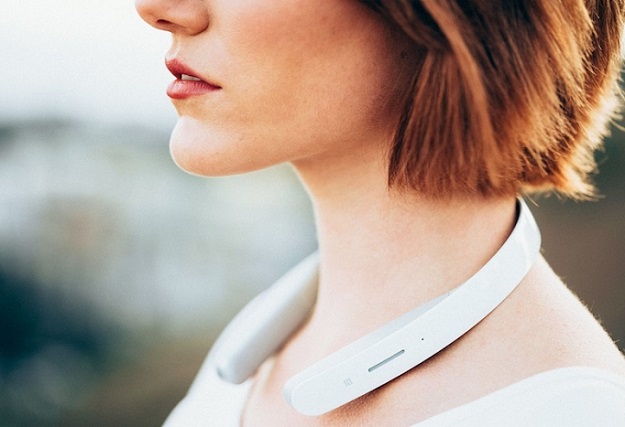 Want to listen to music on the go? Put on a pair of headphones. Don’t want to block out the ambient sounds around you? Play it on your Nintendo Bluetooth speaker. Don’t want to annoy everybody else with your loud music? Well… sorry, dude, you’re out of luck. At least, until Sony’s Concept N headphones actually make their way to production.

Unlike traditional headphones, the tips on this pioneering design don’t actually go in or over your ears. In fact, there are no buds or ear pads involved. Instead, the tips, which sit on either side of your neck, contain speakers that shoot its sound upwards straight to the ear, essentially serving as a precision-targeted speaker, allowing you to listen to music while staying aware of the rumblings going on around you. That makes it ideal for listening while on the move, whether you’re walking, bicycling, or riding a hoverboard that might or might not explode any time soon.

We’re not entirely sure how they did it, but Sony claims that the Concept N’s sound won’t travel outside your immediate vicinity, ensuring you won’t be disrupting everyone else around you the way playing music on Bluetooth speakers would. For those who prefer a more traditional headphone experience, it comes with a pair of buds that you can wear on your ears. Unlike traditional ear buds, though, they come with holes punched at the center to allow ambient noises to come through. Features include an integrated camera and voice command support.

The Sony Concept N is currently only a prototype developed by the outfit’s Future Lab division.