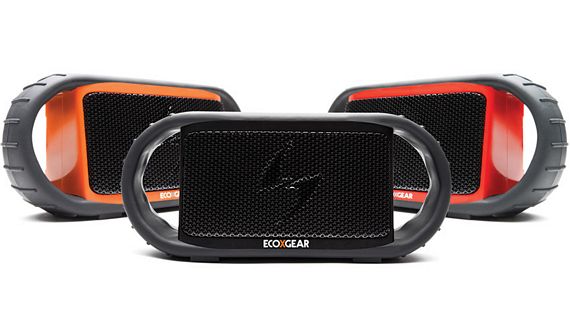 Your Jambox can do well as your portable speaker for playing music while at camp.  As long as you don’t get into a bind, that is.  If you’d rather carry gear that can survive the ravages of the wild, this ExoXGear ECOXBT should prove a more capable alternative.

Clad in an oval-shaped edge panel that’s styled like tank treads, the gadget should survive most common drops without sustaining fatal damage.  The two ends of the oval panel should serve as handles, too, allowing you to carry it by hand or to hang the whole thing on a branch while chilling out by a tree.  Since drops aren’t the only danger for electronic gear in the wild, it’s also fully waterproof.  In fact, it will float in water, allowing you to continue enjoying your tunes even while fly catching in the middle of the lake.

The EcoXGear ECOXBT measures 4 x 9 x 2.8 inches and weighs 1.5 pounds.   It pairs with smartphones and other music-playing gadgets via Bluetooth, blasting sounds over its dual 2-inch full-range stereo speakers.   Features include built-in mic for speakerphone function, LED panel indicators and controls on the top side, a built-in 1,800 mAh battery (rechargeable via USB), and a stainless steel grill cover.  It can operate for over 10 hours of music playback at average volume settings on a full charge.

While I prefer the Philips Shoqbox and its sleeker durable design, it has nowhere near the EcoXGear ECOXBT’s waterproofed powers.  Plus, this one’s notably cheaper, priced at just $99 when it debuts later this year.