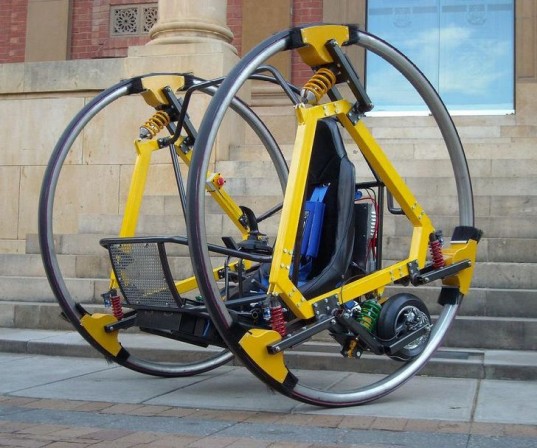 Diwheels have been around since the 1870s.   The goofy looks and inconvenient size, though, have made sure there’s little chance it could ever see mass adoption.  The same likely holds true for the EDWARD Electric Diwheel, but that doesn’t make it any less awesome.

Made by a team of students from the University of Adelaide, the odd two-wheeler seems equipped for use both as a tool for amusement (read: a ride that will make you puke) and actual transport.    While we doubt we’ll be seeing diwheels across bike lanes any time soon, a quick look at the video (you can see it below) makes it really difficult not to want one.

EDWARD has the driver sitting (actually, it’s more like sloshing back and forth) between two oversized wheels.  Since being in a constant stomach-turning motion isn’t likely good when you’re driving anything, they equipped it with active rotation damping technology, which keeps the driver in a stable position while the vehicle goes through its paces.  Sporting an electric powertrain, it can ferry drivers at up to 25 mph.  That’s the serious part.

Because diwheels are more likely to be recreational toys than a real transport option (and, no, the Veltop likely won’t fit in there), the motorized contraption comes with plenty of ways to deliver amusement.  Aside from the sloshing during riding part (by disabling the rotation damping), you can also pull the handbrake to make the inner frame revolve inside the wheels, so you can keep the motor running while doing perpetual somersaults and going nowhere.  They have a feature called inversion control, too, that lets you operate the vehicle while hanging upside down (it moves in a turtle-like pace, though).

You can check out the team’s demo video for the EDWARD below.

[University of Adelaide, via]