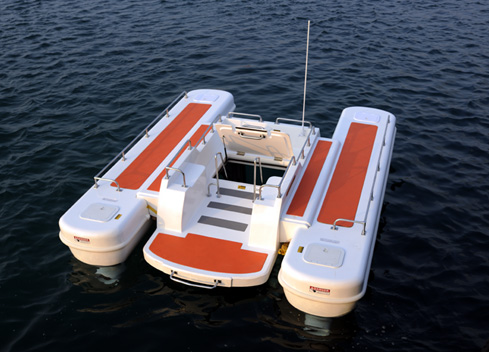 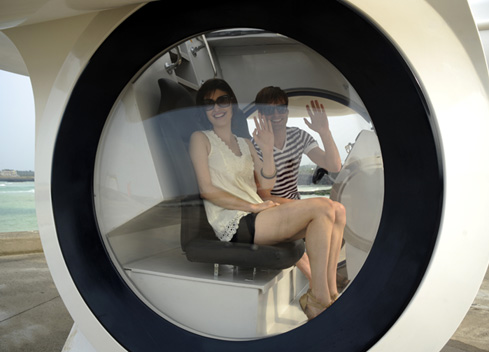 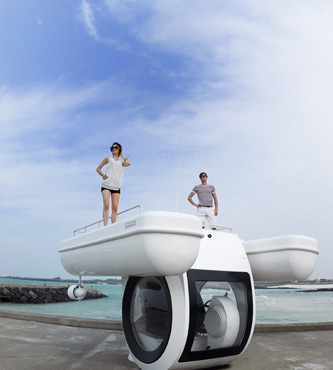 Most of us will never be inside a submarine (yep, even a tiny submarine).  A semi-submarine, however, might be a tad more achievable.  That’s exactly what the Raonhaje  EGO is.  Well, sort of.

Despite the “semi-submarine” billing, it’s actually just a boat with a bottom cockpit that has giant glass windows on three sides.  That way, you can ride your boat while being privy to what goes on underwater — but just a few feet off the surface.

The EGO is a battery-powered boat designed for operating just like a car (or a video game, actually), with an accelerator pedal (instead of a throttle lever) and a direction switch (for pointing to where it goes to next).   That way, even landlocked dwellers who are seeing the ocean for the very first time might be able to drive one.

Above the water, the central hull (which holds the cabin below) is flanked by two additional ones for safety.  Underwater windows are made from German-made acrylic materials, which are similar to the ones used in large aquariums to withstand water pressure and enable light transmission.  Twelve 8-volt batteries power the dual electric prodded propulsion at a top speed of five knots, with a full charge lasting anywhere from 4 to 8 hours, depending on speed (better pray you don’t lose charge in the middle of the ocean).

The Raonhaje EGO comes with full monitoring and communication equipment inside the cabin, just in case you remember you need to drive it while you gawk at whatever you’re supposed to find right below the surface of the water.  No word on pricing, but the vehicle supposedly debuted at the Miami Boat Show this month, so it could be ready for the masses soon.