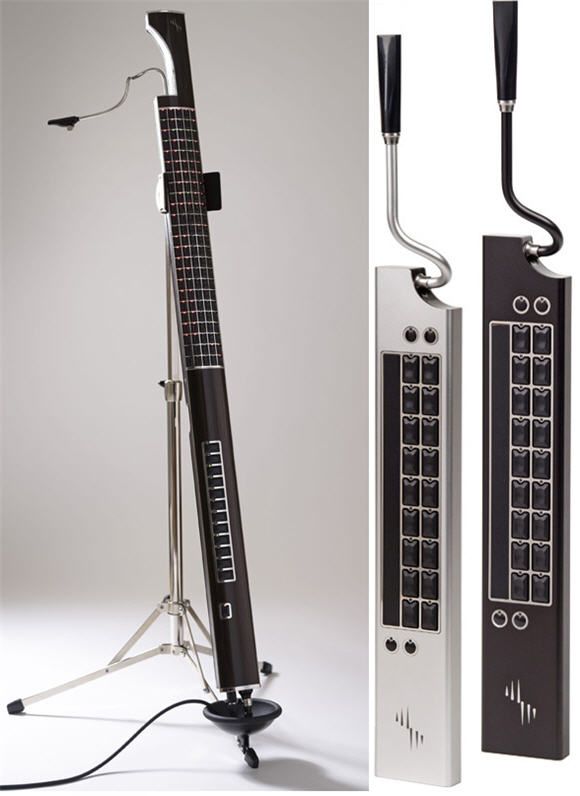 Described as “part-piano, part-woodwind and part-drum” (which, I think, is a terrible way to put it),  the Eigenharp Alpha is one crazy-looking instrument.  Simply put, it’s a cornucopia of musical functions, all rolled into a single electronic machine.  What exactly does it bring?

Intended for professional use, the Alpha puts a limitless range of sounds on a musician’s fingertips (and lips).  The insane contraption can play native instruments (Cello, Clarinet and Synth are currently available, with plans to have more via software updates), play and record loops, program beats, change scale and key, switch and layer multiple sounds, transpose, alter tempo and a whole lot more – right from that long strip of body.  Basically, it’s a super-sequencer and synthesizer for today’s generation of computer-toting musicians.

The rig plays upright, with the breath pipe’s mouthpiece situated near your lips, so you can huff air into it like Kenny G.  It’s a very different instrument than that dude’s sax, however, sporting 120 multi-function keys, 12 percussion keys, two strip controllers and a selection of pedal inputs.  One hand should fiddle with the 120-key set near the head of the unit, while the other hand is meant to stay along the percussion set near the bottom.

Like all digital instruments, of course, it’s meant to be used with a computer in tow.  In this case, however, you’re limited to Macs (a Windows version is expected for 2010, though) and the proprietary software that Eigenharp is bundling into the contraption.  It comes with a strap so you can play it onstage while staying mobile.  Sucks there wasn’t an option to play it wirelessly, though, which would have made a world of difference (not that I care, I’m not a musician).

Apart from the Alpha, which costs a steep $5,800, Eigenharp also released a less-featured version.  Called the Pico, the $500 device comes with a similar breath pipe and upright orientation, although it only features 18 keys and one slider.

Check out the video below to see the Eigenharp Alpha in action.