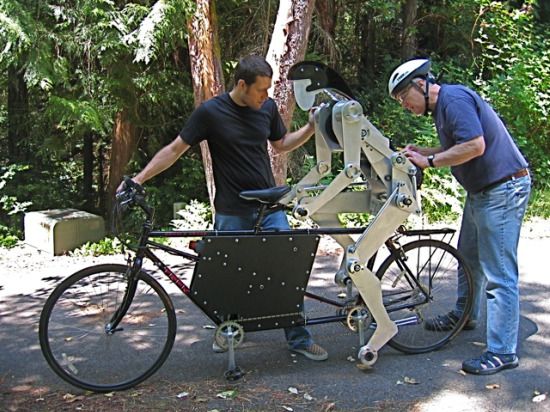 Want to ride a tandem bicycle but can’t find a partner?  That wasn’t exactly the motivation behind Joules, but the pedal-pushing, tandem-biking robot should easily make the grade.

According to the creator, who goes by the totally non-anonymous name of Chris, the robotic cyclist was conceived after a challenge was issued by his son, a former bike pro.  The idea was to build an electric tandem that is powered by actually pumping the pedals, pushing the ride both around city streets and up inclines all by itself.  Of course, since it’s a tandem, you can add your own pedaling efforts, but why bother? 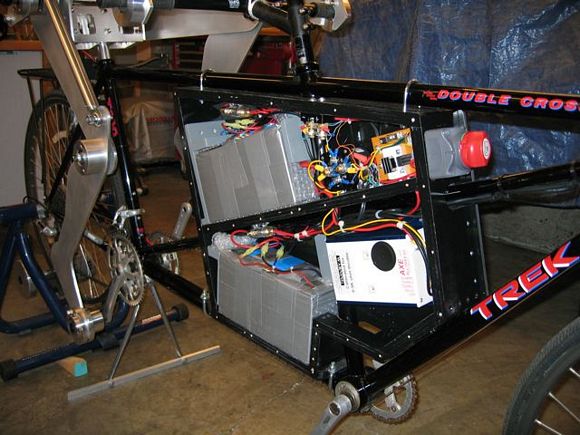 Joules, who sits on the stoker seat and is decked like a humanoid rider, is literally the electric bike’s drive system, working its human-proportional legs to get those wheels a-turnin’.  The rear-riding robot was built using 0.25-inch thick 6061 aluminum for majority of its body parts, most of which are articulated as was necessary for an optimally-postured bike rider.  From Chris’ explanations, it sounds like the setup could work even if all he installed were the legs, but how eye-catching would that be, right?

The system is powered by a PMG-132 electric motor installed under the front seat, connected to the bevy of mechanical construction that powers Joules’ legs.  Chris says the whole thing weighs about 200lbs and took about four months to build.

You know what?  This inspires me.  I now want to build an electric shopping cart with a robot that pushes it from behind with one leg, while the other foot is perched on it – just like the kids at the supermarket.  Now, if only I can actually be bothered…