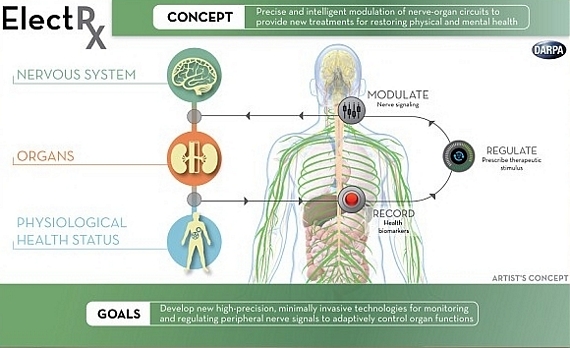 From super strength to extended lifespans, we all dream of a future when science will give us superhuman powers.  A new body implant currently being developed called ElectRx (pronounced “electrics”) is designed to give individuals Wolverine-style healing powers, monitoring vital organs for problems and stimulating the nerves that can fix them as necessary.

Sponsored by DARPA, it’s a neuromodulator whose function is modeled off the body’s own peripheral nervous system, which constantly monitors the status of internal organs and regulates biological responses to any imbalances.  Each implant will monitor for a specific problem, then activate the individual neural circuits that will help manage it on the spot.

ElectRx will be about the same size as individual nerve fibers, a massive reduction from the size of existing neuromodulators, the majority of which have dimensions similar to of a deck of cards (yeah, imagine inserting something like that in your body).  As such, these new implants won’t require invasive surgical implantation – instead, they can simply be administered via intravenous means (so unless you’re afraid of needles, it’s all good).   Early experiments for the technology have focused on implants that regulate immune system function in response to inflammatory diseases, such as rheumatoid arthritis, inflammatory bowel disease, and systemic inflammatory response syndrome.  They claim the technology can also be used in improving peripheral nerve stimulation treatments for a variety of brain and mental health disorders, including epilepsy, Post-Traumatic Stress Disorder (PTSD), and even clinical depression.