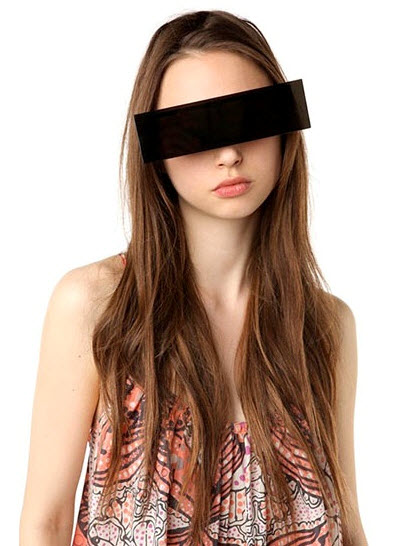 You’re in party mood.  And you know you’re about to do something embarrassing.  While risqué behavior isn’t something new, doing crazy stuff in public isn’t as safe as it used to be — photo and video evidence can easily find their way onto someone’s Facebook page or YouTube account.  Stay incognito the entire time by wearing these Embarassing Photo Security Sunglasses.

Ever seen one of those photos with the person’s eyes blacked out to keep their identity anonymous?  Well, the shades work exactly the same way.  Except there’s no need to get on Photoshop afterwards — you’ll automatically have that identity-obscuring black strip over your eyes every single time.

You wear the Embarassing Photo Security Sunglasses just like any regular eyewear, held up and kept in place by temples and nose pads.   Instead of rims and a dark lens, though, it’s just one big slab of plastic that covers your eye area, while allowing you to see through from behind them.

We have no idea how comfortable this thing is or how well you can see from behind that black plastic.  Looking at that girl wearing the shades, though, it is pretty clever, although we doubt it really works that well for keeping your identity under wraps (at least, with someone who actually knows you).   The black strip does cast some doubt, though, so you can always indignantly insist it wasn’t you partying at the gay bar in that photo every time mom asks (busted).