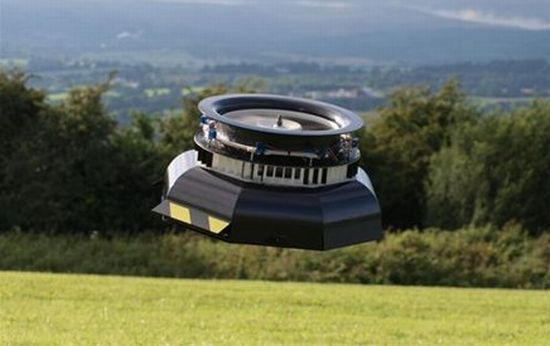 Unmanned aerial vehicles take all sorts of shapes and forms, from nondescript bug-like robots to stealth gliders.  Ones decked out like flying saucers, though, just have that special appeal that makes everyone take notice.

A new British company called Aesir recently showed off their first prototype that borrows a leaf from erstwhile alien spacecrafts.  Called the Embler, the unmanned vehicle is designed to make use of the Coanda Effect, where air speeds up as it attaches itself to a well-shaped curved surface.  According to the company, the flying saucer drone works by directing the air down to boost its lift.

The Embler is the company’s official demonstration machine and will be the basis for a series of three larger disc-shaped aircrafts they have in the pipeline.  It sports a carbon-fiber airframe, along with an electric motor that can take to the skies for up to ten minutes.  Check out the video at the end and watch that thing move – just like they used to do it in cheesy sci-fi movies.

Next on Aesir’s drawing board is the Vidar, a 300mm diameter flying saucer that can carry a 100 gram payload, and the Odin, a one meter diameter UAV that can transport 10 kilograms of payload for up to one hour.  Yep, that will be exactly what we need – more UFO sightings.

The company is said to still be in the development stages and is currently bankrolled by a single investor (who, we are assured, is not an alien).  Here’s to hoping they stick around.  The future just looks wrong without flying saucers and that’s a fact.