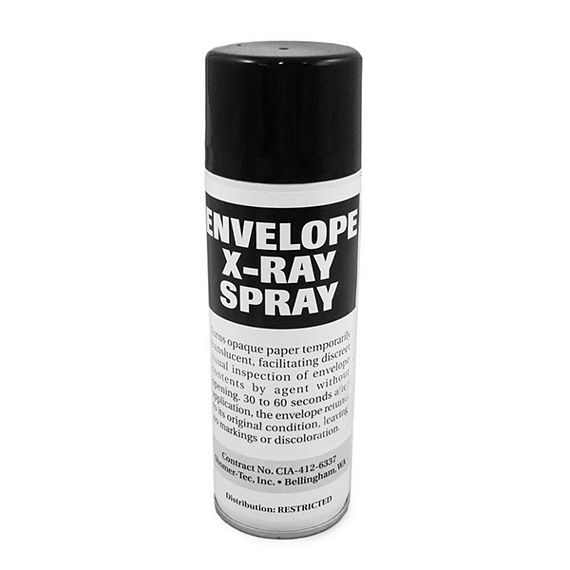 Opening sealed envelopes to find out their contents then sealing them back in like nothing happened is easy enough with the right tools on hand.  Unless you accidentally rip something out because you’re a crappy spy, that is.  If you’d rather avoid the whole potential for trouble, you might want to invest in a can of the Envelope X-Ray Spray instead.

Able to make erstwhile opaque paper turn into a temporarily transluscent state, it lets you quickly check what’s inside an envelope.  Whether you want to stage a magic act that has you guessing what people place inside envelopes, take a peek at your bills before opening the envelope for whatever reason, or perform some other (ahem!) legitimate activity that involves spying on sealed letters, this will do it without requiring you to rip anything open.

The Envelope X-Ray Spray won’t make the paper transluscent forever — instead, it will only be that way for 30 seconds, after which it will begin returning to an opaque state.  Like magic, it will leave no stains, no markings and absolutely no indication of what you did, ensuring your evil acts of spying will not be discovered.  Each can contains enough solution to cover several hundred square inches of paper, so this should be good for numerous spying jobs.

Whether you’re a private investigator, a wannabe-spy or a diagnosed psychopath with a penchant for “doing anything to get ahead in life,” the Envelope X-Ray Spray should figure as a useful addition to your bag of tricks.  It’s available now, priced at $14.49.