EOS Mixtape Watch Straps A Cassette Tape To Your Wrist 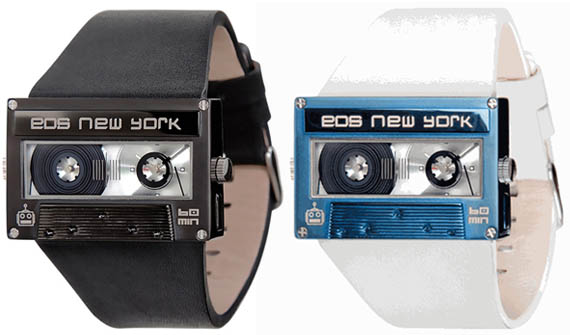 Miss cassette tapes?  Neither do we.  Those things were cumbersome.  Still, many folks have beloved memories of the olden recording medium, from the first albums they bought to traded mixtapes of all sorts and inclinations.  EOS brings the retro recording medium back, but wisely keeps it away from music, with the EOS Mixtape Watch, a timepiece that features a steel case clad in a cassette tape design.

When I first saw it, I seriously thought the ribbon wound from one side to the other and that’s how it told time.  Which would have been awesome.  Well, it does, but only for the seconds (it turns one pace per second).  For the hour and minute, it’s got two luminous hands on the right side, feintly hidden underneath the tape mechanism, and that’s how you’ll really know you’re late for work. Again.

The EOS Mixtape Watch uses an anodized stainless steel body, paired with a calf skin band and buckle clasp.   It’s pretty much a regular watch save for the 80s-throwback styling, using Japanese-quartz movement for the mechanism and boasting water resistance up to 99 feet.

Cassette tapes may have sucked, but they do look good shrinked down in size and strapped to your wrist.  Even when you’re late for work.  The EOS Mixtape Watch is available in a range of colors for $135.