Escape From Skynet And Hop On Board Terminator: The Coaster 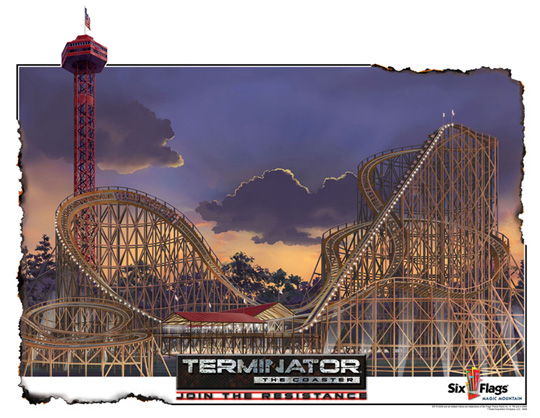 Oddly enough, while ideas of Terminator androids bring to mind lasers and metal-armored robots, the ride will be a wooden creation.  No explanation has been given for the strange contrast of theme and build, although initial renderings of the ride look awesome.  Perhaps something in the upcoming McG movie will explain the whole idea behind it?

The 2,850-foot-long coaster will include five belly-turning drops, six inclined banking turns and will go up to 100 feet at its highest point.  The experience will be supplemented by visual and audio effects which, we assume, will make you feel like you’re being chased by Terminator robots – or, at the least, get you even dizzier and more disoriented.  Start-to-finish will last for three minutes with the Millennium Flyer trains reaching moderate top speeds of 55 mph.

Built by the highly-acclaimed Great Coasters International (GCI), theme park fans have high expectations for the new ride, which will replace the much-criticized Psyclone that used to occupy the spot it will stand on.  Passengers will be treated to integrated video modules that set the story for the ride – you are joining the resistance and running away from Skynet by hopping aboard.   Terminator: The Coaster is set to start turning guts during Memorial Day Weekend 2009.