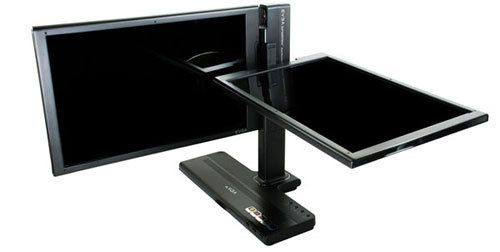 Looking for a more interesting dual monitor setup? Try the EVGA Interview 1770, which fits in two 17-inch LCD panels and combines it with some interesting rotation options that allow it a variety of uses.

The ultra-thin LCDs each offer 1440 x 900 resolution, with a 500:1 contrast ratio and 220 cd/m2 of brightness. A single central stand holds both of the two panels, where they can swivel 180 degrees horizontally as well as clamshell in together (to protect the actual displays, in case they’re not in use). It comes with a three-port USB hub, a 1.3 megapixel webcam and integrated mic right on the spine, along with an interface for dual keyboard and mouse controls, to allow up to two people to work on the same machine.

Basically, you can orient the displays so that one faces you, while the other faces whoever’s in front (even above, as in the pic), allowing two people to access the same system concurrently. It re-orients itself depending on where it is facing, so the other person doesn’t have to hang with his head down like Spiderman to watch the images onscreen.

EVGA claims this makes the Interview 1770 ideal for use in training situations and collaborative work – admirable and noble applications, on their own, of course. We all know what its real use is, though: playing Street Fighter one-on-one, arcade style.