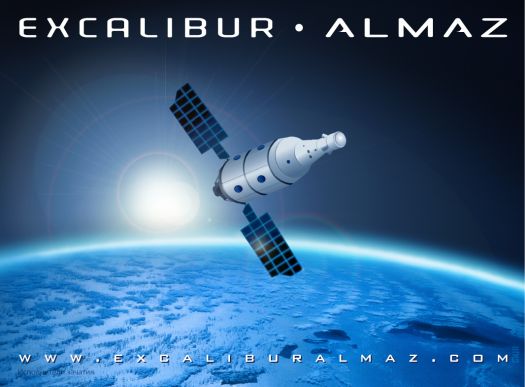 If any of you millionaire fiends want a little more variety in your space travel options, then your wish has been granted.  A new spaceflight firm, Excalibur Almaz, recently announced their upcoming service that offers orbital tours aboard Cold War-era reusable reentry vehicles.

The company, which bought numerous units of the Russian military surplus capsules, Almaz, last August, will be offering week-long trips into orbit by 2013.  Each trip will see passengers ride aboard a service module attached to an Almaz RRV  for majority of the experience. They will later transfer to the reentry capsule (either Almaz or one of their other RRV properties) for the return back to land.

Back in the Cold War, the Almaz were armed spacecrafts intended to fly into orbit under the cover of being civilian research stations.  Instead, their main function was performing spy work, right from outside the Earth.  The capsules were shelved after Russia realized (along with the US) that unmanned spy satellites were more efficient alternatives.

Excalibur Almaz will compete directly with Space Adventures, the other private firm currently offering similar orbital trips.  According to the company, they decided on the ambitious project after a private market survey that claims to have found many potential customers unexcited at the prospect of sub-orbital travel, such as what Richard Branson’s Virgin Galactic has been offering.

Want a slice of that new travel pie?  Get your piggy banks in order because it won’t be cheap.  Excalibur Almaz is looking at a $35 million price tag for the experience aboard one of their flights.

[Flight Global via The Register]