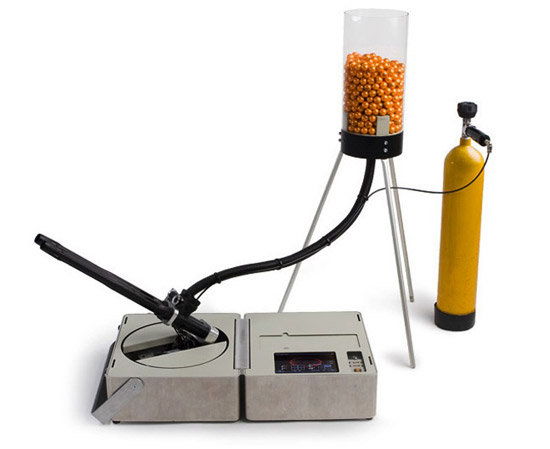 Painting a mural is hard work. Plus, you can’t draw for for your life. So move over and let the Facade Printer, a paintball-shooting, mural-painting robot, do it for you.

Developed by German product designers Martin Fussenegger and Michael Haas, along with engineer Julian Adenauer, the device is technically an inkjet printer. Instead of propelling droplets of ink onto paper, however, it hurls colors onto a wall using a paintball gun. It takes care of all the aiming and shooting, too, requiring nothing more than an SVG file of the design to be loaded onto its onboard computer before it gets to work. 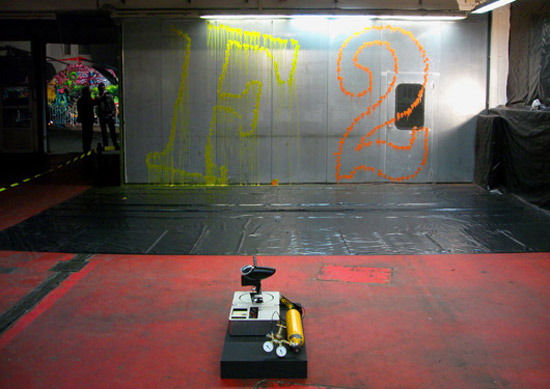 The Facade Printer uses a pressurized barrel (from a modified paintball system) mounted on a two-axis turntable with stepper motors and gears. It uses the setup to manage the direction of each shot, which imprints individual dots on the targeted wall. Each paint projectile hurls out of the barrel at 100mph, blasting its colors onto a wall up to a distance of 20 feet. It works pretty fast, too, doling out an average of five projectiles per second.

System is controlled by an onboard industrial PC, which runs a proprietary software (which takes charge of all the calculations and movements) and a custom touch interface. Users can load the desired designs via a USB port. Before firing away at the innocent wall, the integrated camera can take photos of it, which the machine can display on the screen, overlaid with the original design. The user can then adjust position and scale, if necessary. 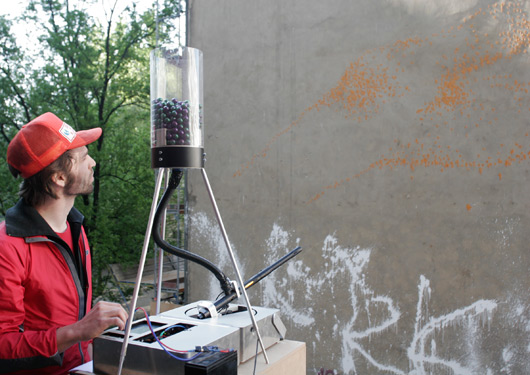 While you can’t buy your own Facade Printer yet, they are open to the idea and will consider it upon demand. Yep, them damn neighborhood kids can then graffiti the heck out of your house faster than ever. They do accept bookings for those who want paintballs shot at their walls. Pricing will depend on the project, however, so best get in touch with the guys to get an idea.