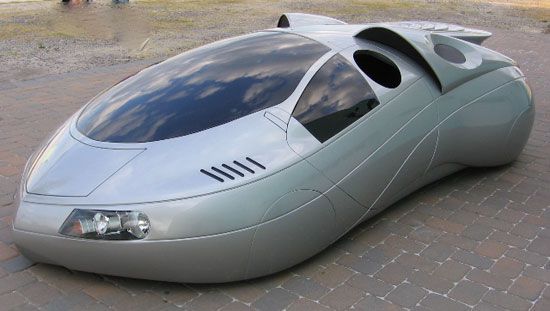 After seeing countless science fiction movies and television shows, we all have some idea of what an “alien car” would look like. For many of us, this Extra-Terrestrial Vehicle (ETV) will probably fit the bill. Cue the background music, E.T.’s coming out!

Instead of managing to fly or hover like any self-respecting futuristic car should, however, the ETV can only drive down the same roads that you do. Yep, it’s a regular car enclosed in an otherworldly frame that makes most space-inspired design concepts look like third-grade compositions in comparison. It won’t buoy you up in the air but it sure will get you plenty of attention.

Designed by Mike Vetter and his Florida-based “The Car Factory”, the ETV combines futuristic bodywork with a Chevy Aveo’s frame and guts. Sporting a teardrop shape, the car features a dome-like shell, gullwing doors, fully-covered tires and pretty much every design cue you can imagine fitted on an unearthly ride. Vetter says they’re selling ETVs using either an Aveo (like above) or a Porsche Boxter as a donor car.

I still can’t decide whether stepping out of this thing is more akin to dorky or cool. I guess it all depends on whether you’re wearing Vulcan-like ears while you’re doing it. At any rate, I doubt anyone in their right mind will give up a Porsche Boxter to have it fashioned into a twelve-year-old’s dream car, regardless of how many sci-fi movies they’ve collected over bittorent. It just isn’t right.

Vetter reportedly had a listing of an Aveo-based ETV on eBay, but it’s been taken down now. Price was a similarly out-of-this-world $86,000.