Farmville For Dummies: Because Social Gaming Is Soooo Sophisticated 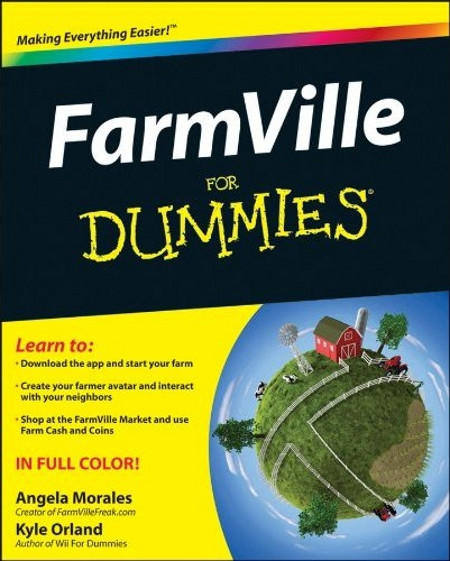 Want to play Farmville so you can exchange farming stuff with your Facebook friends but find the utter lack of skill involved an affront to gaming?  We can’t help you there.  But this book might: Farmville for Dummies.

I know what you’re thinking.  Contrary to rumors, dummies don’t play Farmville yet.  Instead, its virtual world is populated strictly by idiots (the category I, apparently, belong to) and people who have too much time on their hands.  Combined, these two groups of people comprise 80 million of the world’s population.  Now, any dummy like you can join us.

Farmville for Dummies is a paperback publication written in the same vein as those popular For Dummies titles that have flooded bookshelves over the last few years.  Author Angela Morales, in case you don’t know, is the founder of the largest Farmville fan site in the world, so this is written by someone who likely spends every waking hour obsessing over her virtual crops.

Comprised of over 288 pages, the book promises to be “an ideal introductory guide to the wildly popular online game of FarmVille.”  There are walkthroughs for getting started playing (whether on Facebook, Yahoo or on your phone), tips on various activities you need to do to advance (like finding neighbors, shopping at the market), advice on how to stay on top of new features and help with common technical issues.

The book is slated for publication February 15, so it’s only on pre-order.  You can reserve yourself a copy now for around $13.