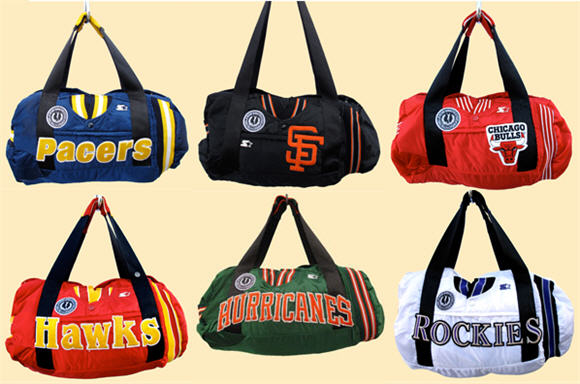 Say you’ve got a couple closets full of vintage starter jackets.  I’m not sure what the market for that is, but I guess it’s not too lucrative.  After all, the No Mas team was compulsively collecting them with no idea what they will do with the stockpile. That is, until Dee & Ricky saw the heap and suggested recycling the set.

The result is a very impressive new line of starter jackets sewn into something entirely new: mini-duffles that go by the name of Finisher Bags.  Unique gym sacks you can’t find anywhere else, they’ve been fashioned using nothing but the jackets, coupled with a pair of straps.

Preserving as much of the original jacket’s patterns as they can, the short coats are creatively handsewn into very impressive designs.  The bulk of the material became the Finisher’s body, with the snaps removed for repurposing as the bag’s closure.  Bag ends were made with the jacket’s shoulders, the collar was used as pocket seams and the sleeve trims were employed as strap padding.  Logos were retained to feature on either side of the bags, along with an additional No Mas patch.

If you’re into collecting starter jackets, you’ll probably cringe a little as you see your favorite vintage pieces violated for converting into a sack.  Regardless, it’s tough not to be wowed by the wholly original product they were able to come up with.  Those torn jackets you decided to hold on to?  You can turn them into these – one-of-a-kind, original pieces that are as cool as the source creation that spawned them.

No Mas has the Finisher Bags selling for $300 apiece, with 22 designs to choose from (currently) and more to come, as they convert other jackets in the collection to functional mini-duffles.  If you find one you like, best get it quick, as you’ll never know if they’ll have the same team on the shelves again.