You Made What Into A What? The Ferrari Roller Coaster 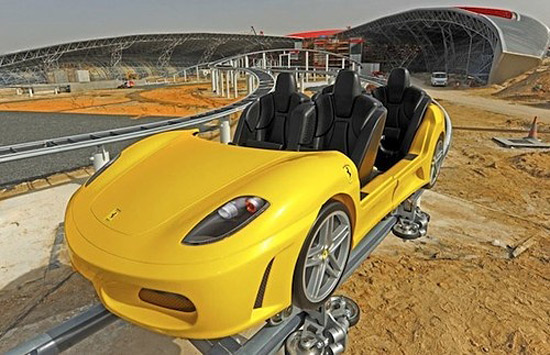 One of these days, you’ll own a Ferrari too. Is that what you keep telling yourself to make you feel better about your life?  That’s what I do. In the meantime, we can make do with this: a Ferrari roller coaster.

Just one of the many attractions you can look forward to at the almost-finished Ferrari World Abu Dhabi theme park, the coaster will involve two tracks running parallel to each other. You ride in a Ferrari F430 replica, with seating up to four people, which runs right alongside a similar car on the other track, effectively making it feel like you’re racing neck and neck.

If that’s not awesome enough, note that this is only the second fastest ride in the whole park. The distinction of owning the fastest runtimes will reportedly belong to the F1 attraction, which they’re touting to go at a ridiculous 149 mph, making it the fastest roller coaster in the world. No pictures for that one, but seriously – why would you ride a four-seater Ferrari when you can plop your ass on an F1 that’s even faster? Makes no sense.

Over 20 rides and attractions are planned for the facility, which, by the way, is also set to become the world’s largest indoor theme park. Honestly, though, I am not a huge fan of theme parks so Ferrari World Abu Dhabi only brings my excitement scale up to half full. My only lifelong dream has been to make out with a girl – even a not so pretty one – inside a Ferrari. So, if they add a Ferrari hotel, where you can bunk inside a cramped F430 with a partner, I’m totally flying in. Abu Dhabi, here I come!