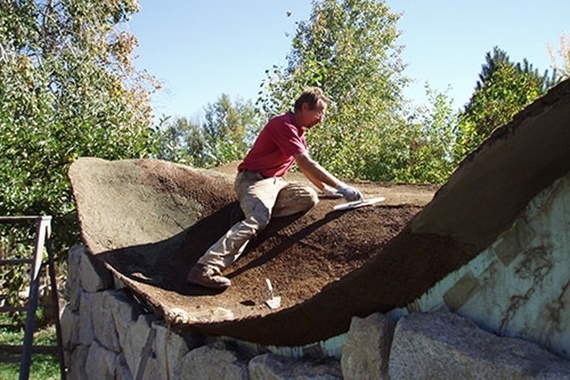 Cement is one of the most important construction materials.  That’s why we produce a ton of it.  That’s also why 5% of all man-made emissions actually come from cement production.  Yeah, it’s incredibly polluting.  Problem is, we can’t really get away from cement, considering we need it to build a whole lot of structures, from our roads to our buildings to our homes to our ultra-tough ping pong tables.  At least, not until we find a more eco-friendly alternative.  That’s what Ferrock is supposed to represent.

Created by David Stone back when was a PhD student, it’s being billed as “a revolutionary, eco-friendly substitute for cement.”  More importantly, though, they claim that, when used as a binder for concrete, Ferrock is stronger than even Portland cement (the leading type in use today), boasting higher compression requirements before breaking, so its use will actually reinforce any structure constructed, rather than compromise it.  It also has a greater bending force, which could lend it more resistant to earthquakes and more resilient to tumultuous weather.

Ferrock is made using waste steel dust, those discards from industrial processes that usually just end up in landfills.  The iron from those dusts react with carbon dioxide and rust, forming iron carbonate that is, then, fused into the final product.   That means, any carbon it produces during production can easily be offset by the amount of airborne carbon it uses up to produce the final product.  In fact, they claim that it’s carbon-negative (as in, it will use up more of the pollutant than it will create), leading to an industrial process that actually ends up cleaning the air.

Stone originally discovered the process back in 2002.  Twelve years of refinement later, he’s ready to take it to the public and has started a new company called Iron Shell to commercialize the invention.