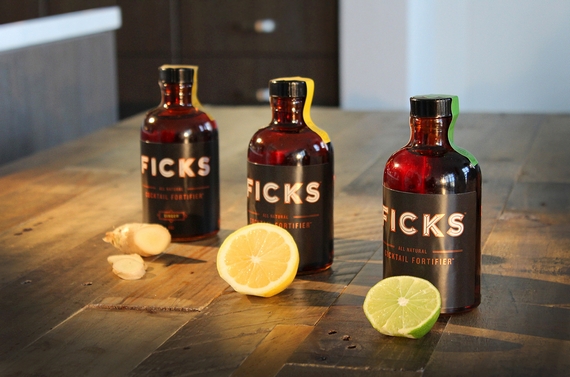 Alcohol is fun.  That’s why we drink it.  Lots of it, in fact. And we willingly live through the consequences of drinking too much, from carrying cab driver napkins to throwing up at work to waking up in Canada with no idea how we got there.  But what if you can imbibe the same amount of hooch while minimizing the less-than-desirable effects?  That’s exactly what Ficks Cocktail Fortifier claims to bring to your mixology kit.

An all-natural cocktail fortifier, it contains a special blend that helps counteract the alcohol’s damage on the liver while fortifying the body to prevent alcohol’s dreaded effects come the following morning.   I know, it sounds like a dream come true: drink as much as you want and still have a good shot of having a productive day tomorrow.  How can anyone say no?

Ficks uses a mix of vitamins, electrolytes, and antioxidants to offset alcohol’s dire effects, essentially replacing whatever the body uses up during alcohol metabolization.  You simply add half an ounce of the fortifier to any cocktail you’re making and it’s immediately reinforced with an assortment of health supplement staples, such as ascorbic acid, alpha keto glutaric acid, thiamin, dandelion extract, L-glutamine, and more.  Since it’s mixed into the drink, it comes in three flavors (ginger, lemon, and lime) that are commonly used as garnishes and accents in many cocktail recipes, allowing drink-makers to fortify your drink without messing up its taste (they claim it blends in just like a regular garnish).

Originally an Indiegogo project, Ficks is now a retail product.  It’s available from Amazon, priced at $14.99.