How To Fill Your Wardrobe With Red Carpet Oscar Dresses 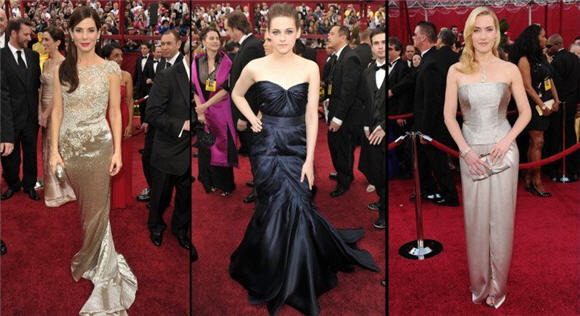 Though you’ll never be a celebrity, there’s nothing stopping you from trying to look like one. You’ve already copied Sandra Bullock’s hair, eyebrows and lipstick, but wisely kept your own cleavage (good thinking btw). So, why not don her showstopping dress from the Oscars too?

But…but…you can’t afford that Marchesa, I know. That’s why I’m sending you over to Chinese warehouse wholesaler Light In The Box, who already have a page up selling replicas of dresses worn by the stars during the Academy Awards.

You thought they only cloned iPhones, PSPs and Buell shirts in Shenzhen? Please. They clone everything in China. Heck, they’d probably clone Sandra Bullock herself if they had a factory equipped to do it. And I’d buy one too if they agree to make sure Jesse James doesn’t know about it. Man Jesse James definitely is one cool dude. All those cool motorcycles and cars and now Sandra as a loving wife.

The page lists a slew of Oscar dresses they can produce, which include a whole range from Mariah Carey’s A-line off-the-shoulder blue dress to Faith Hill’s strapless sweep to Miley Cyrus’ floor-length sweetheart tulle. All dresses are tailored upon order and are claimed to look exactly like the red carpet originals. Turnaround time is 10 to 15 days, with the dresses available in varying standard sizes. You’re allowed to send in your own measurements too.

So, which dresses did you like at the Academy Awards? Charlize Theron’s Christian Dior? Penelope Cruz’s Donna Karan? Sarah Jessica Parker’s Chanel? Whichever struck your fancy, you should be able to get a replica for a literal fraction of the price, as the cost on the page ranges from as low as $109.99 to just a shade under $500. Of course, we can’t account for how good the dresses will actually be, so consider it an adventure in fashion.