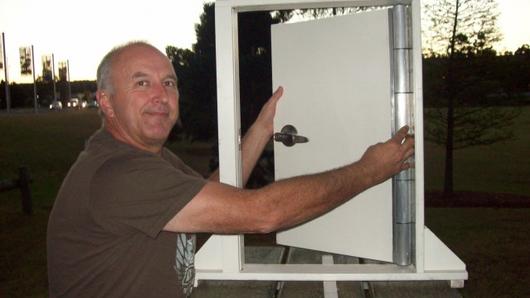 If you’re stupid and regularly get your fingers stuck between the door and the jamb (ouch), then you need either one of two things: better common sense or the Finger Hinge.  That’s right, you can stay as dumb as a rock and never suffer from crushed fingers again!

A full-length hinge that removes the accident zone between the door and the jamb, it seals the entire gap of space where countless people have found their fingers unceremoniously trapped.  Mostly kids, of course, but if you still get trapped at your ripe old age, just know that I’m not judging (well, not so much, tee-hee).

Intended to replace both butt and pivot hinges, the Finger Hinge combines the two designs into one.  It attaches to both the door and jamb, but uses a mesh of rotating segments on a barrel the same thickness as the door (35 to 37 mm, on average), so the area remains filled the whole time the door is opened.  More than simply removing the potential for accident, the hinge can also rotate 90 degrees both ways, allowing you to both push or pull the door to open, provided there’s nothing blocking the egress.

According to inventor David Ashard, the hinge has provisions for an electronic device that can allow it to open and shut at the touch of a button.  This makes it ideal for many commercial uses, apart from the obvious home benefits of a crush-proof door.

The Finger Hinge is now in production, according to its official website, so you can begin looking forward to staying stupid while never having crushed fingers again.  At least, until you try working with a hammer.