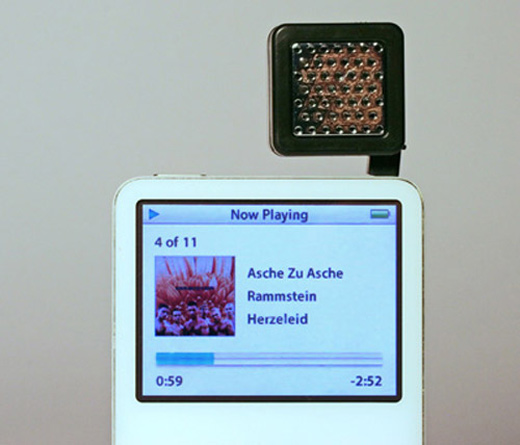 Tired of portable speakers that aren’t all that easy to carry?  Feast your ears on the Fingertip Mini Cube Speaker  a 1-inch block that claims to play music from your media player for all the world to hear.

Just slightly bigger than a dice, the sound-pumping contraption should fit handily in most any available pocket on your clothing.  Weighing a mere 17g, you can put a double-sided tape on its backside and stick it to your shirt, without feeling any pinch whatsoever.  Rated at 0.8 watts, though, I don’t know how much audio delight it can actually afford you.  But, hey, isn’t it as cute as a button (not to mention, nearly as small)?

The Mini Cube’s creators claim it is the smallest standalone speaker unit in the world and I don’t think I’ll bother disagreeing.  Who in their right mind, after all, will really want to create an outdoor (I assume that’s what you use portables for) speaker that looks like it can barely churn out a peep, much less a whimper, of a tune?

According to the specs sheet, though, the minuscule audio device offers “superior sound output” with built-in amplification.  While I have my doubts, that’s hardly enough to deter me from such a cute accessory, which purports to support the majority of PMPs and DAPs in the market (including the iPod).  It even comes with a hole for slotting into a keychain as well as a port for charging via USB.

If the Fingertip Mini Cube Speaker can really survive playing Rammstein as it does on the photo above, it couldn’t be all that bad, right?  It’s available right now for only $10.