Fire In The Hole? Extinguish It Fast With The Stat-X First Responder 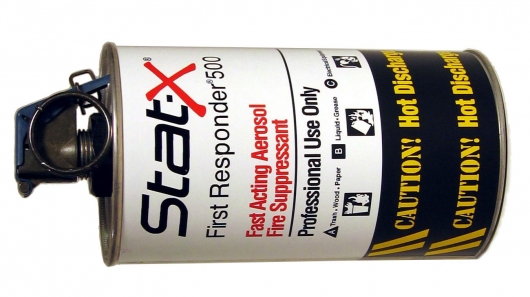 There’s a literal fire in your literal hole?  Take it out quickly with the Stat-X First Responder, an aerosol-based fire suppression device designed for confined spaces.

Using a proprietary aerosol fire extinguishing agent, the handheld device can kill a blaze faster than you can find a decent show on basic cable anytime of the day.  Actually, you can do a lot of things faster than surfing channels to find a good TV show these days, so that’s a really bad comparison.

The Stat-X First Responder is only about the size of a soda can, but can literally snuff out a fire within seconds.   Taking the form of  a stainless steel canister, it’s a self-contained fire-extinguisher that brings a solid charge of aerosol-forming materials inside it.  Once activated (i.e. when it detects burning), it will produce an ultra-fine cloud of suppressants that seep through the discharge ports.  That aerosol cloud will produce a chemical interaction with the flame’s free radicals, eventually subduing the growing fire.

Should flames break out in your basement, walk-in closet or nerd fort, simply throw the device in and let it do its job.  Creator Fireaway claims it will work instantaneously, putting an end to fires before any further damage could be done.

Currently used in many installations, including the NASA Kennedy Space Center, various utility providers and numerous mining companies, the Stat-X First Responder is one of those clever little things any rescue crew should do without.  If Batman were real, I’d bet he’d have one or two around his waist.