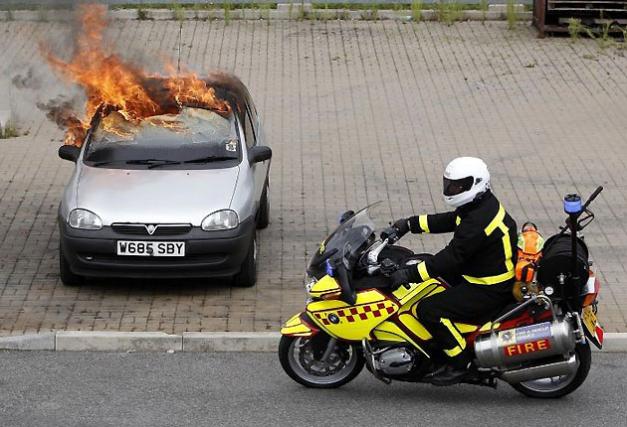 Fire trucks are great.  It would be better if they’re giant monster fire trucks, though, with a license to flatten all vehicles on their path while on the way to an incident during traffic.  Since that’s never gonna happen (let’s face it, you need a high-level of genius to appreciate that idea), I’d happily settle for this emergency traffic beater: a firefighting bike.

Commissioned for the Merseyside Fire and Rescue Service in Liverpool, England, the specially-equipped motorcycles come with every fire-dousing equipment necessary to effectively subdue a small blaze.  While it won’t replace a high-capacity truck any day soon, having a couple of firemen with the tools to offer a quick, first-response should help keep small outbursts (such as car fires and spontaneously-combusting subhumans) from getting worse.

The modified BMW “fire bikes” are loaded with state-of-the-art equipment that can be used to fight blazes as soon as they arrive on scene, all without impinging on the mobility that gives the vehicle its unique transport advantages.  Each one comes with 50 liters of water, a chemical foam and  water pump that can dole out wetness at short distances up to 11 meters.  Passenger capacity is restricted to just the rider, though, since all extra space is occupied by the needed supplies.

Only two of the firefighting motorbikes have been deployed, as part of a six-month pilot run to see how well they serve the station’s service area.  If they prove successful, it’s not far-fetched to imagine that the rest of Liverpool might see similar setups for other rescue stations.