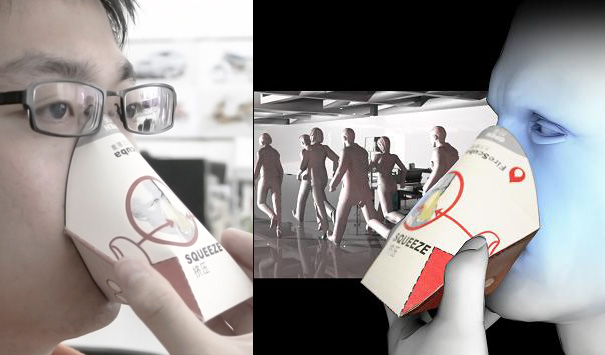 Contrary to how it may look like, the photo above isn’t about people sniffing french fries pouches.   Instead, the FireScuba is a concept safety mask that will allow you to breathe through thick smoke during a fire.

Just like a smoke hood, the protective device filters what you inhale, protecting you from the possible ramifications of smoke inhalation.  Given that the design isn’t airtight, it’s not likely to be as effective as the former.  Still, in precarious situations, even the littlest help could mean the difference between making it out the door or passing out on your way there.

Conceptualized by Dang Jingwei, the FireScuba is just a cardboard mask that you put over your mouth and nose.  To keep the deadly carbon monoxide from entering your airstream, it is lined with carbon filter, which converts the lethal air to harmless carbon dioxide.

Obviously, this will need to be tested to prove viability, but the idea makes sense.  If they can find a way to close the edges along your face, this could prove an excellent emergency tool to always keep around.  A form resembling a surgical mask probably makes more sense too.

Why not just use an actual smoke hood?  Because you can’t, realistically, carry one around at all times.   The FireScuba, on the other hand, can easily slip into your wallet, go between the pages of a book or sit in your front pocket, ready to be put to use during unexpected situations.  You know, for those nasty events like fires, explosions and people farting in the elevator.