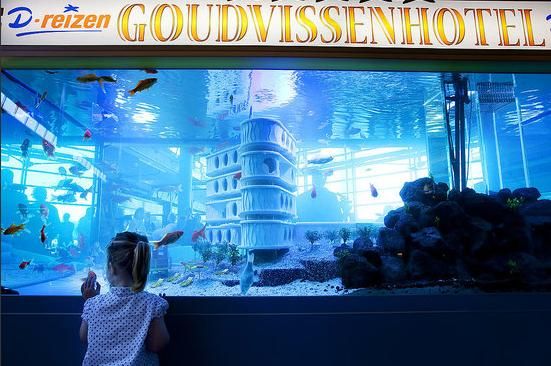 Fish can survive long durations without food.  They have water, after all (just kidding).  But, seriously, leaving your swimming pets to fend for themselves even for just a week isn’t that great of an idea.  That’s the motivation behind the world’s first Fish Hotel, a large aquarium where you can bring your beloved water creatures before jettisoning out to live your vagabond lifestyle.

Located at Amsterdam’s Schiphol Airport, the one-of-a-kind pet lodging is pioneered by the D-reizen Travel Agency, presumably, as a service to their customers who can’t find someone to care after their tanks while they’re away.  Just drop the critters off with the service crew and watch your pets commingle among their newfound friends. 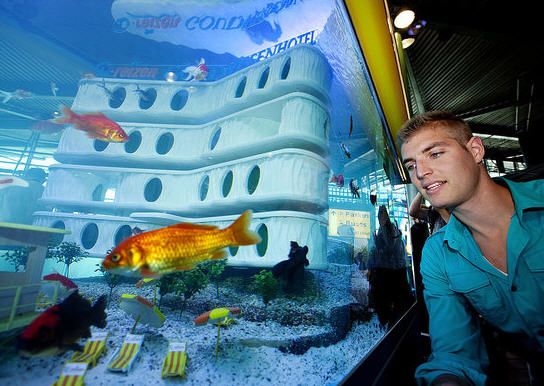 The “luxury establishment” (which is a fancy Fish Hotel word for a large aquarium) takes the “lodging” concept a bit too human-like.  According to reports, the tank comes outfitted with a four-floor miniature hotel with a palatial architecture, complete with fish-sized rooms, a tennis court and a pool with a water slide (yep, a pool inside an aquatic tank).

If you’re going on vacation, you might as well provide one for your pet as well, right?  I’m not sure about the rules of the Fish Hotel, but I sure hope they have some guidelines about what types of fish they’re willing to check in (though it looks like it’s strictly for goldfish varieties, based on the photos).  The last thing I want is for my teeny, little crew of scaly animals to have to share room with a carnivorous sea monster that’s about four times their minuscule size.  That doesn’t sound like a vacation at all.