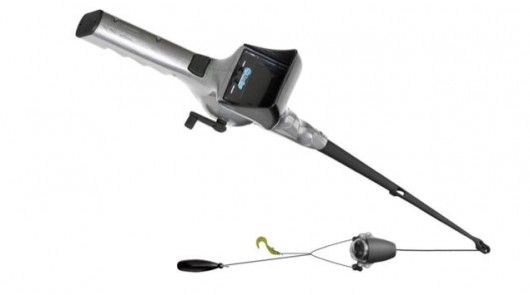 Sick of casting a lure, waiting an hour and feeling a tug, only to reel it in and find you managed to catch a wonderful pair of boots swept into the water?   If you’d rather see what’s biting your hook before wetting yourself in excitement, you might want to trade up your favorite combo for the FishEyes Rod & Reel.

Looking more like a controller for a fishing game than a rod and reel combo, it features  a camera on the line and a built-in LCD monitor right on the handle, so you can watch the action happening under the water.  That way, you won’t only see when you’ve got a yellow perch chomping on your hook, you can catch a glimpse of the Loch Ness Monster and SpongeBob Squarepants when they happen to swim by, too.

The FishEyes Rod & Reel uses a 20-foot combined video and power cable as its fishing line, tethered to the reel-mounted monitor on one end and a submersible video camera on the other.  LED lights are built into the camera, so you can watch the underwater scenes unfold clearly.  If you just want to spy on crocodiles in the swamp, you can drop the line in the water while you sit on the boat enjoying the show from the display.

In case you’d rather snag yourself some catfish, though, the camera can be strapped onto a short fishing line with a bait basket to attract fish (you can tie your lure hook on there).  That way, you can watch in detail as fish get attracted to your lure, linger by and finally snap its jaws onto your trap.