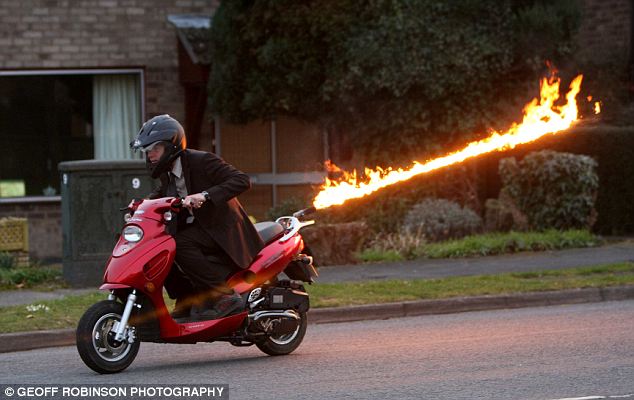 On a hotness scale of 1 to 10, a 60mph scooter will seldom get past being rated a 6. Unless you equip it to fart deadly flames, that is, just like Lincolnshire resident Colin Fruze did.

A scooter is hardly a scary road rage machine. With this thing in tow, though, you can literally wreak some havoc on the road.  Want to side-swipe me? Burn to a crisp, you big fat SUV. Oooh, your Harley is so badass. Boom! Now you’re Ghost Rider.

We’re not sure what kind of moped Colin converted, but it looks lame as all hell. Heck, I’d rate it a 3 on the hotness scale. But once he presses that button on the scooter’s handlebar to activate the rear-facing flamethrower, it immediately drives up to a 10. Blowing flames that can reach 15 feet long on a good day (12 feet is the average, apparently), nothing else matters. 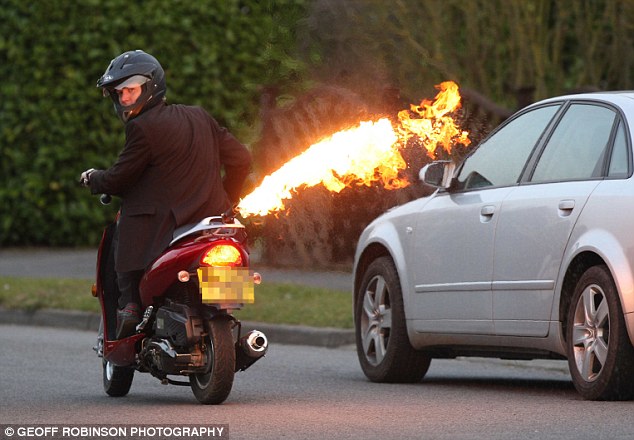 According to the modder, he first tried attaching a flamethrower on a BMX bike. When that worked, he immediately set off to do the same thing to his moped. It took the 30-year old three tries, but the current incarnation works beautifully. “I’m very pleased with it,” he notes.  Obviously, he’s a cheerful guy, since he also adds that “it can get rather hot if you are riding the moped and blast the flames when the wind is in the wrong direction.” Ouch.

He added a lever system so he can change the angle of the flame, which should be very useful when trying to char both a tall truck and a skateboard, one after the other. Colin says it’s illegal to fire the flames while on the road in his town, so he’s only planning to use it on off-road trips. Yes, the pictures above were definitely not taken while on the road. Absolutely.