Flashlight Speed Holster Makes Drawing Your Flashlight Faster Than Ever 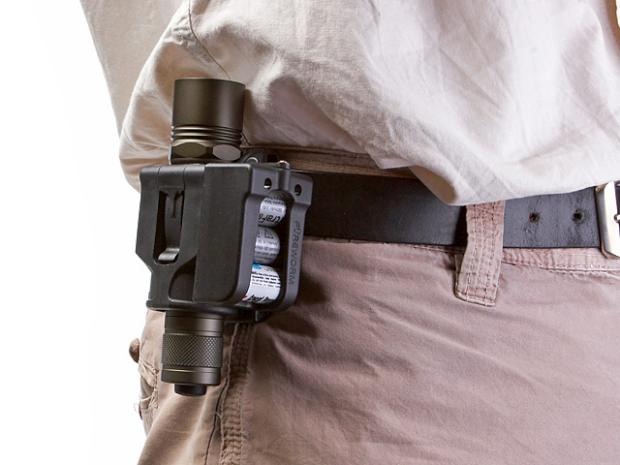 Does it take you a long time to pull out a flashlight in the dark?  Shave a few microseconds off your draw time with the Flashlight Speed Holster, a belt-clipped accessory that could garner you the title as “The Fastest Torch in the West.”  Or maybe not.

Before you dismiss it as another amusing yet perennially useless product from Brando, picture this.  You’re camping at a secluded area, it’s dark and there’s not a star in the sky.  Suddenly, you hear a rustling from nearby.  Is it a snake, a bear, a Chupacabra, perhaps?  You reach out to your backpocket where you keep your flashlight handy.  As you pull it out and turn it on, you hear another rustling.  The moment you shine your light in the area where the sound was coming from, you end up finding nothing.

Now, imagine the same situation with the torch holstered up in one of these.  You could have caught a glimpse of whatever it was making the sound.  Now, you’ll never know.

Like any self-respecting safety compartment, the Flashlight Speed Holster not only carries your lighting equipment, but comes with an extra chamber that holds up to three batteries.  It’s made from polymer material and can handle three common sizes of flashlight, namely the 28-31 mm, 24.5-27 mm and 2.5-24 mm.  Two pieces of adjustable plates serve as clips, allowing you to rotate it in different angles on either side of your waist.

Knowing Brando’s knack for putting out well-though-out, albeit suspiciously useful, items, there must be some modern-day cowboy somewhere who’s cheering his guts out that something like this has finally come to the market.   The Flashlight Speed Holster is available now for only $17.