Flat Light Puts A Functioning Desk Lamp On Your Wall 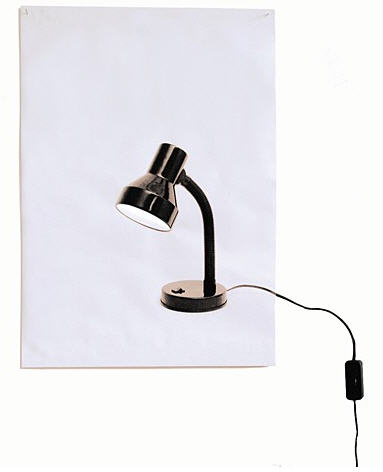 A cool desk lamp might add a little style and class to your mess of a work area, but lets face it, it still takes up already scarce space on that prime piece of desk top property. Not the Flat Light, though, which attempts to impart all the same decorative and illuminating functions, without taking up room in your desk.

Created by Finn Maggee, it’s part visual gag and part functional equipment. Instead of an actual lamp, it’s actually just a poster with the picture of a lamp imposed on it. Unlike other posters, however, it integrates a bank of LEDs within the design. Plug it onto a wall outlet, flip the switch and it will turn on like a real lamp.

According to its creator, he initially fashioned the Flat Light as a way to find out whether a picture of a lamp can be as effective in lending “an atmosphere of productivity and efficiency to the room” as a real one would do. The poster itself measures 16.5 x 23.5 inches and actually looks like a real lamp floating right by your wall. Which is pretty weird.

Finn adds that the poster uses LEDs that don’t heat up, thus avoiding the potential fire hazard of combining electronics with paper. It’s available now in a limited run of 50 pieces. Price is $195.