As good as iOS games have become, that virtual joystick remains a bane.   Without the tactile feeling of flanking to one direction, after all, the whole experience is just odd.  Thankfully, some clever fellows came up with a solution in the form of Fling.

Billed as a tactile game controller for the iPad, it adds an actual analog stick that you can place on the screen right where the virtual control is supposed to be.  When you move the stick, it performs all the necessary screen contact to replicate the gesture, giving you a real deal analog control for your erstwhile touch-only games. 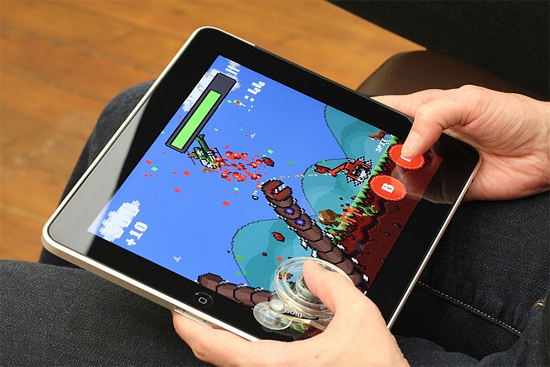 Fling’s analog stick is machined aluminum, with the rest of the body constructed out of a transparent and flexible engineering resin that won’t scratch your tablet’s display.    According to creators Ten One Design, the transparent material allows it to be practically invisible during play (so it doesn’t hinder your view of the screen).  To keep the controller in place, the assembly is tethered to a pair of suction cups that you can stick anywhere on the front surface.

The controller auto-centers when you let go, bypassing any game’s default settings for continued movements (which, let’s face it, can lead to some crappy gameplay).  Couple that with the obvious precision you  get with tactile controls and this should round out to a much improved gaming experience on an iPad.

Currently on pre-order, Fling will ship in packs of two, priced at $38.   They have it in three transparent colors with absolutely non-descriptive names — ice, ninja and ultraviolet.