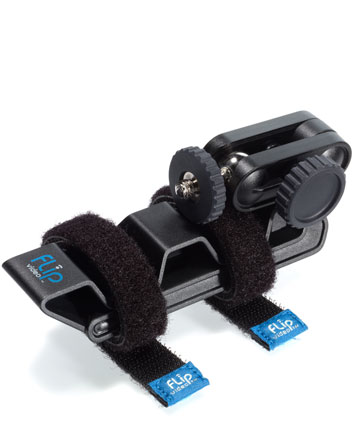 Despite pioneering the pocket cam scene, Flip hasn’t been a huge hit on the action cam market, since duct-taping one to your in-line skates unicycle doesn’t seem like the most brilliant of ideas.  It’s not all too late, I suppose, as the company just released the Flip Video Action Tripod, an all-in-one mount that turns a regular Flip camcorder into a versatile action shooter.

Designed to work with old and new Flip camcorder models (as well as many other camcorders — it uses a standard screw), the accessory can be used as a regular tripod on any flat surface.  Set it down at the bench during a game and record everything in its periphery like with any regular camcorder and tripod set.  Bundled with a set of straps, however, you can now employ the same mount for use on a variety of objects, such as helmets, handlebars and any other place you can wind them around. 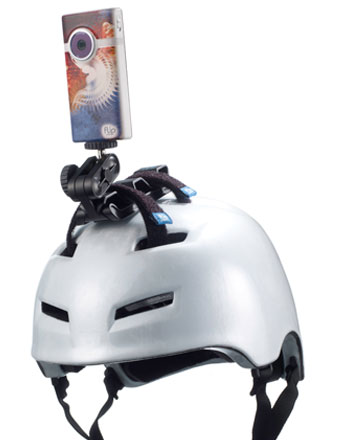 The Flip Video Action Tripod consists of a single plastic contraption with tripod legs that you can fold in when you want to attach it to any of your extreme sports equipment using a pair of included straps.  Once wrapped firmly, you can adjust the angle of the head according to your desired shot and lock it into place with the built-in thumbscrew.

If you can dress your camcorder in a more sturdy case when using with this, we highly recommend it.  The tripod screw is the only thing that will be holding it the entire time — a second level of security should help prevent some very plausible accidents.