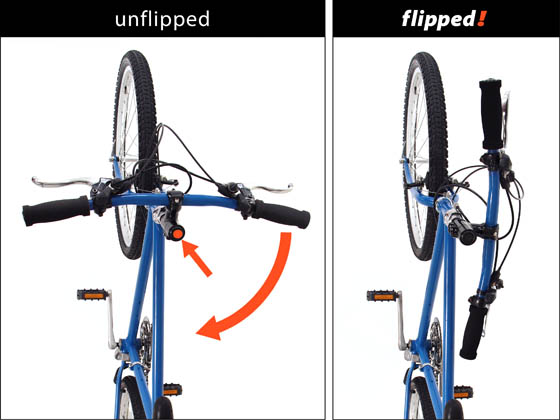 Bicycle storage is rarely pretty with those handlebars sticking out, making it impossible to push under tight, narrow spaces.  There might be a way to manage that soon with the Flipphandle, a replacement handlebar stem that turns the bars 90-degrees for storing flat.

Invented by  Alejandro Lacreu, the unique bicycle component won a silver medal winner at the 36th Salon Des Invention in Geneva back in 2008.  Lacreu and his team have been testing and improving it since then.  Now, he’s gone to Kickstarter to try and get a serious production run going. 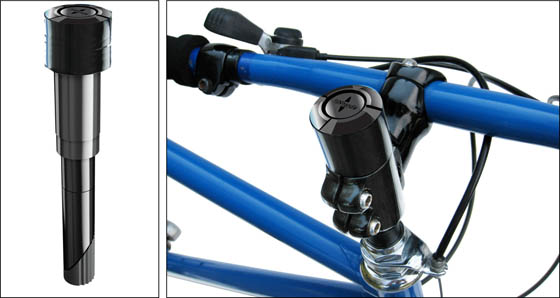 The Flipphandle uses a high-strength carbon steel tube as its core, with a plastic spinning tube sitting right on top of it.  A spring-driven canonical cam provides the locking and unlocking mechanism, clicking the handlebars into place both ways.

It can work with both threaded and threadless steerer tubes using a variety of adapters, with installation being no different than any regular handlebar stem.  For putting away, you simply push the button at the center, which releases the internal catch, allowing you to rotate the bars parallel to the frame for leaning flat against the wall (well, almost flat, since those pedals will still be sticking out) even in a narrow hallway.  To use the bike, simply rotate it back until the handlebars click into place.

From the sound of it, the Flipphandle will not only be great for storage, but could prove very helpful when transporting your bike on a train or even inside a car.   They’re still waiting for enough backers before going into production, though, with $75 guaranteeing you one unit.