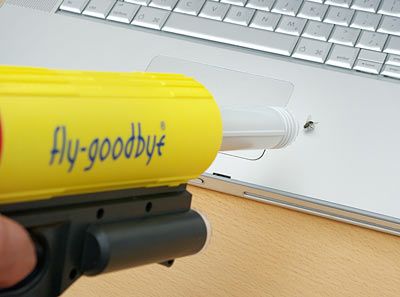 Can’t stand flies, but don’t want to earn the ire of animal activists?  Put those fly swatters away and load up on the Fly-Goodbye Bug Vacuum Gun, a pistol-shaped sucker that can rid your home of insects, without having to kill them.

While I, personally, couldn’t care less about letting bugs live, you may be otherwise inclined.  If you are, the Fly-Goodbye Gun should offer a usable alternative, holding the flies captive, without killing them off.

Sporting a look and feel similar to regular toy guns, the Fly-Goodbye ditches the shooting mechanism to fit in a suction cylinder, which capably plucks out flies and other small objects within range, sounding off with a loud “POP” when it successfully snags a target.  You can choose to arm it with a catch-and-release cylinder, which keeps the flies in the enclosed tube until you can decide what to do with it (suggestion: put it in your boss’ office…just saying).  If you’re not feeling especially altruistic, you can opt to slip in a glue cylinder, instead, which effectively traps the flies in its adhesive walls (eventually, leading them to their deaths). 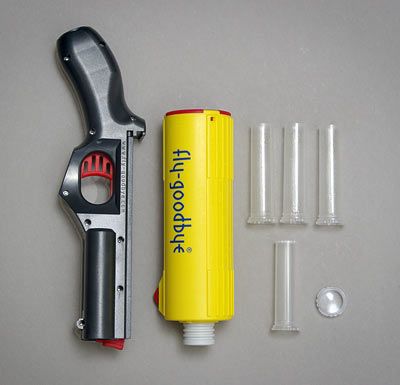 The catch-and-release cartridge comes with a magnified snap-on cap, which you’ll need to attach as soon as you suck the insect in, so it doesn’t escape.  You can watch the fly in gross, puke-inducing detail via the cap’s lens.  In case you find the bug endearing, you can keep it permanently there, make it your pet and even give it a name.

Ready to swear off fly-swatters permanently?  You can score the Fly-Goodbye Bug Vacuum Gun, which comes with one catch-and-release cartridge and three glue cylinders, for around $30.